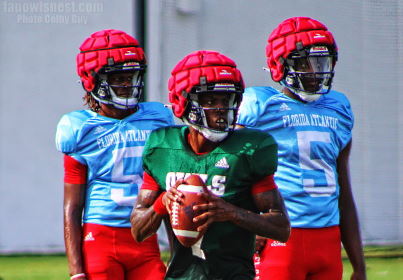 The Owls are now just three days away from taking the field against the No. 11 Gators and it's been all business this week leading up to the big game. With N'Kosi Perry (photo, middle) now established as the starting quarterback, the Owls are preparing more and more for a tough matchup against UF. In 2021's first rendition of Midweek Mashup, we're going to take a look at Florida Atlantic's week one opponent, what FAU must do to beat the Gators and more nuggets from this week's media availabilities.

The Gators are missing a lot of notable starters from last season, including quarterback Kyle Trask, tight end Kyle Pitts, and wide receiver Kadarius Toney, with all of them making the jump to the NFL. However, the Gators' new-look offense features talented players who will step up and take their place.

Emory Jones will be the starting quarterback for the Gators (as you could tell, by Willie Taggart Jr. [photo, left] and Michael Johnson Jr., [photo, right] wearing number five in their blue scout team jerseys.), possessing a lot of speed that makes him a dangerous dual-threat signal-caller. "They will use a little bit more quarterback run game [than last season,] something you obviously have to be prepared for," defensive coordinator Mike Stoops said. "[Jones] has a tremendous arm, I've seen him throw, he can do anything they'd want him to do." In limited playing time last season, the redshirt junior had 221 passing yards, two touchdowns, and an interception on 13-32 (56.3%) passing.

6'4 senior tight end Kemore Gamble steps up to replace star tight end and the 2021 NFL Draft's fourth overall pick Kyle Pitts. Gamble is just a little slower than Pitts and doesn't have the same 6'6, 240 lb frame Pitts has, but he still provides a lot of physicality at the position at 6'4, 215 and is a threat in the receiving game. In 2020, he played in all 12 of Florida's games, racking up 160 receiving yards and three touchdowns on 10 receptions playing behind Pitts. Expect Gamble to become a bigger part of the Florida offense coming into today's game.

An area of concern for Florida is their cornerback depth. Behind Kaiir Elam, who is one of the best cornerbacks in the nation, posting 11 pass deflections, which ranked third in the nation, 28 solo tackles, 39 total tackles, and two interceptions in 2020, the Gators' depth is dwindling with junior Jaydon Hill missing the 2021 season with a torn ACL. Redshirt freshman Avery Helm is listed as the second cornerback on the depth chart, with the amount of collegiate experience on the roster dwindling past that point. Texas A&M graduate transfer Elijah Blades is the only other cornerback who isn't a freshman in eligibility. He sits behind Helm as of right now on the depth chart to play next to Elam. Freshman Jason Marshall is the highest-ranked recruit on UF's roster and has played with the ones despite being listed behind Elam on the left side of the Gators' defense. With the lack of experience in the system between the three players behind Elam, FAU's receivers could take advantage of the mismatch that provides.

In Case You're Wondering


Guide To Beating The Gators

The passing attack is FAU's number one way of beating UF, and N'Kosi Perry has the tools to do it. "He's a guy that has the experience factor," offensive coordinator Michael Johnson said. "He's a guy that has played in big games, we have a talented quarterback and I believe N'Kosi Perry gives us the best chance to beat the Gators." Perry has a lot of weapons at his disposal, but the weapon that could be used to take advantage of UF's weaknesses the most is freshman wideout LaJohntay Wester.

With Elam likely covering TJ Chase, Wester provides a unique skill set of speed and route-running ability that could be a mismatch against Florida's depleted cornerback group. The Palmetto, Fla. native was one of the biggest standouts during camp, becoming one of the premier players in the Owls' receiving group. It will also be important for FAU to get their tight ends involved and take advantage of a weaker Florida linebacker group. "I think we have improved," Johnson said. "We have a couple of new guys who have learned the offense during fall camp who weren't here during spring and they're going to make us better in that room." Lucas Luft and Zaire Mitchell-Paden are the two new guys Johnson was referring to. Both of them have been featured in two-tight end sets and have been really impressive in the passing game during fall camp. Mitchell in particular brings a combination of size and receiving ability at 6'5, 267 lbs, bringing some physicality that could make him a matchup nightmare.

If the Owls are to establish the passing game early and get out ahead of that new-look Florida offense, the Owls will have the opportunity to upset the Gators national stage.