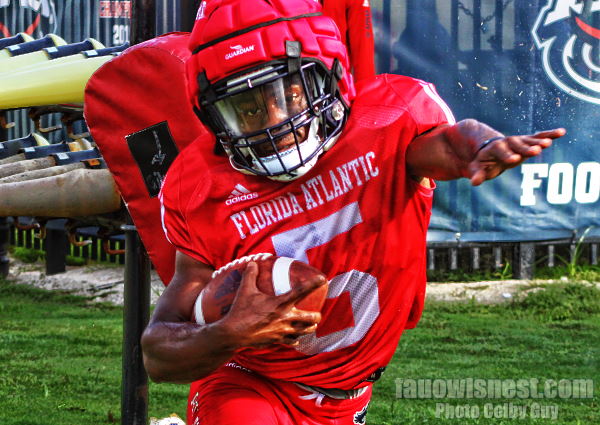 The Florida Atlantic Owls (2-1) are looking to extend their winning streak to three as they get their second road test of the year. They will head up to Colorado to face the Air Force Falcons, who run a unique triple-option attack on offense.

"It's a much different offense," defensive coordinator Mike Stoops said while comparing Air Force's triple-option offense to Georgia Southern's spread-option offense, which FAU beat 38-6 two weeks ago. "The options have similarities but the way they go about it is much different. These guys always have a fullback in a three-spot position. Georgia Southern created a lot of different plays, it's kind of its own read-option type of deal, this is a more veer downhill option game with the fullback being a big part of what they do, so you have to be very conscious of the fullback and play the ball inside out."

The fullback that Stoops is talking about is quite the threat offensively, junior Emmanuel Michel. He showed his ability to break out for big plays in last week's 49-45 loss to Utah State, rushing for 133 yards and two touchdowns. Of those 133 yards, 106 of them came on long touchdown runs, rushing for a 51-yard and a 55-yard touchdown in the third quarter. He was one of three 100-yard rushers that day, as running back Brad Roberts added 113 yards and quarterback Haaziq Daniels had 103.

Air Force is a physical service academy team that will present issues in the trenches for the Owls. "It's a physical game and it's a challenging game where there's a lot of cut blocking that goes on at the line of scrimmage," Stoops said. "You'll have guys chopping at their ankles and cutting them, so you gotta work it during the week and they gotta know what's coming and know how to protect themselves."

The heat is on for the Owls, who look to earn their first road win since Nov. 13, 2020, in the Shula Bowl against FIU. Kickoff for Saturday's game is set for 8:00 p.m. EST at Falcon Stadium in USAF Academy, CO. The game will be broadcast on FS2.