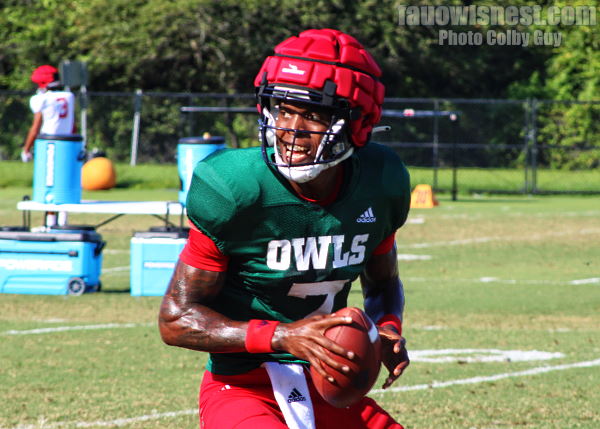 The Florida Atlantic Owls (2-2) enter C-USA play looking to bounce back from a deflating 31-7 loss to Air Force last week. They open up conference play with a familiar foe in one of the most anticipated games on the 2021 schedule, the Florida International Panthers (1-3) in the 20th Shula Bowl.

FAU had just 219 yards of total offense with quarterback N'Kosi Perry [photo] throwing for just 78 yards on the game. With a pass defense that has given up the 13th most passing yards per game in the nation. (291) This presents an opportunity for Perry to get back on the track he was to start the season when he had 871 yards, seven touchdowns, and no interceptions through the first three weeks.

FAU's defense gave up 446 yards of rushing to Air Force, but the game plan is completely different with a non-option team in FIU. "When you play an option team, there's nothing that carries over," defensive coordinator Mike Stoops said. "You go back and re-establish some of the things we do defensively and go back to the things we do."

The Owls will be looking to extend their Shula Bowl winning streak to five, as well as to start the conference schedule undefeated, with a win against Florida International on Saturday, Oct. 2. Kickoff will be at 3:30 p.m. and the game will be broadcast on Stadium.