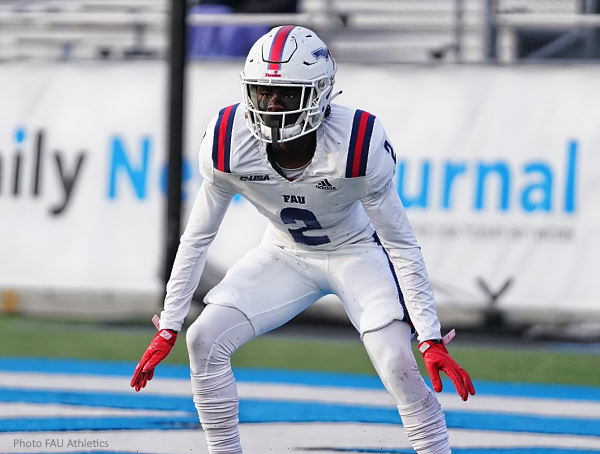 The Blue Raiders posted 615 yards of offense, used special teams trickery, and forced a key turnover that cost the Owls points at a critical time in the contest.

They drop to 2-8 all time in games played at Johnny Floyd Stadium and 2-7 in contests below 50'.

And with only one contest remaining, the loss sets up a critical must win scenario for FAU (5-6, 4-3 C-USA) and they will have to do so against the high powered offense of Western Kentucky.

The FAU defense had its hands full from the opening drive of the afternoon. MT went 75 yards in six plays on the game's first possession to open the scoring.

The Owls responded with an 86-yard drive, capped off by a N'Kosi Perry sneak at the one-yard line. Perry connected with Je'Quan Burton for 43 yards earlier in the drive to set up the score.

The Blue Raiders missed a short field goal on their next drive before putting together three straight possessions that ended in touchdowns.

Down 28-7 late in the first half, FAU got a big play from Jaleel McRae to flip the momentum going into the intermission. The freshman linebacker intercepted MT quarterback Chase Cunningham and returned it inside the five-yard line.

A few plays later, Larry McCammon bulldozed his way into the endzone to cut the deficit in half, 28-14.

Middle Tennessee regrouped and resumed its scoring run with another TD drive to start the third quarter.

FAU counterpunched when Perry found a wide-open Jahmal Edrine down the sideline. The 45-yard catch and run made it 35-21. Again though, the home side needed just seven plays on the ensuing drive to go back up by 21.

The Owl defense was able to force the first Blue Raider punt of the game late in the third quarter. Perry then hit LaJohntay Wester with a 31-yard pass that set FAU up at the one-yard line to start the fourth quarter.

Two plays later, in an attempt to replicate the first quarter QB sneak from the goal line, Perry tried to punch it in, but after review, had the ball stripped and recovered by MT in the end zone for a touchback.

MT delivered the dagger later in the quarter with their seventh scoring drive of the night to make it 49-21.


The Owls will have one last opportunity to become bowl eligible, as they close the regular season at home against Western Kentucky next weekend. Kickoff is scheduled for noon on Saturday.

"We have no choice now. We have to put this one behind us and go play the game of our life next week", Taggart said.

Taggart coached his first game at FAU stadium back in 2011 while leading the Hilltoppers in a facility grand opening defeat of the Owls. Ironically, it may be his last unless he leads the Owls to return the favor to the same team on the same field.