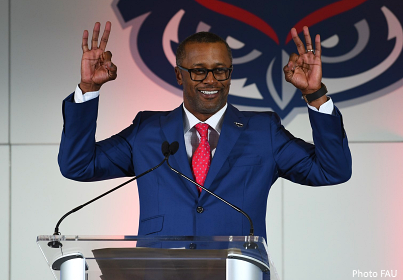 Much has been made about how new Florida Atlantic head football coach Willie Taggart finally has an opportunity to take over a program that does not require a rebuild. Especially since his last three stops had a combined 13-35 record the year before he arrived.

Taggart now takes over an Owl program that has won two of the last thee Conference USA titles and has claimed the top-ranked recruiting class three of the last four years per 247 Sports' player composite rankings.

All signs point to FAU contending for another C-USA title, but some roster attrition and academic issues are giving Taggart more initial obstacles than meets the eye.

According to sources familiar to the situation, the Owls will have to play the 2020 season with a max of 78 scholarship players, which is seven less than the FBS max of 85 scholarships.

In 2017, the NCAA cracked down on the loopholes schools would use to add more than 25 scholarship players per calendar year, to prevent schools from over signing prospects. But the rule has created some unattended consequences.

With a 100 signee limit over a four-year period, schools only have 15 player margin of error to remain at the full 85 scholarship players.

This includes losing players in the ever-growing NCAA transfer portal.

So far, 2018 the Owls recruiting class had seven players who will not complete their eligibility with FAU. This includes Meiko Dotson who recently transferred to FSU, and John Raine who will enroll at Northwestern.

The 2019 recruiting class added plenty of talent but left some positions unbalanced on the Owls roster.

Lane Kiffin decided to have multiple talented players commit but not have the players who were a question mark academically sign national letters of intent, so that they would not count against the 25-man hard cap if they failed to make campus.

As a result of this tactic, some positions such as defensive tackle, safety, and wide receiver are left short, while the running back position carried more scholarships than the average FBS team would carry.

Coach Taggart and his staff have also had to deal with the possibility of losing more scholarship players due to academics.

A total of 12 players were ineligible to participate in the Owls' bowl game vs SMU.

This has left some wondering about the future of some top returning starters like Akileis Leroy and Malcolm Davidson, who didn't suit up against the Mustangs.

These question marks could leave the FAU football with even less than 78 scholarship athletes they are currently limited to whenever preseason may begin.

While the talent on the roster is still good enough to beat anyone in CUSA, the shortage in scholarships though could force younger players who may not be ready into game situations if injuries begin to mount.

Other conferences have called for some changes to the rule to allow schools to fill empty scholarship spots, but those changes will not come for another year or two.

This leaves coach Taggart to do a little of what has he has come accustomed to doing in his stints as head coach - and that's "rebuilding".

posted May 3rd 2020, 3:10 PM
I think it's important to know this issue is happening at many schools due to these rules.

FAU is in a little deeper hole with as Coach Kiffin appeared to be making some decisions based on what was best in the short term.

posted May 5th 2020, 2:49 PM
I remember you reporting a looooong time ago about Kiffin overloading positions while leaving others weak for the future. So it is interesting to see this coming to fruition and the potential impact it will have this season. It may take a cycle for Taggart to balance out his roster and I'm okay with that.

I still believe he has a much better foundation here than he did at WKU and USF. Kiffin left him a ton of talent, and Taggart has been recruiting well.