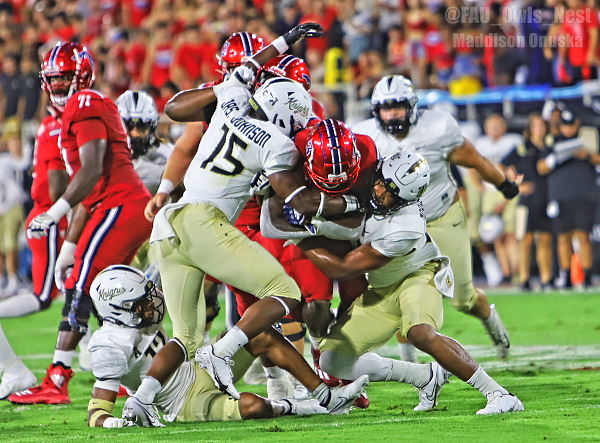 The Florida Atlantic University football team fell by a score of 40-14 to UCF at home on Saturday night.

The Owls drove straight down the field in two minutes on the game's opening drive. Zuberi Mobley cashed in on a 15-yard rush to put the Owls on top 7-0. UCF responded later in the quarter to tie it, but the Owls would go into the second quarter back on top. N'Kosi Perry and LaJohntay Wester combined on a four-yard shovel pass and the latter walked into the end zone untouched to make it 14-10.

UCF tacked on a field goal and a touchdown in the second quarter to take a 16-14 advantage into halftime.

UCF marched 73 yards on the first drive of the second half to make it 23-14. After the Owls went three and out, a pivotal sequence of events set the tone for the rest of the night as the offense would manage just 18 yards thereafter.

Dwight Toombs picked off Knights quarterback John Rhys Plumlee and ran it back to the UCF one-yard line. FAU would be turned away on three straight plays though and forced to settle for a 19-yard field goal attempt, which was blocked, and the Owls were held off the board.

With all the momentum now in tow, UCF pulled away in the final 21 minutes. A touchdown on the ensuing drive made it a two-possession game. The Knights added a field goal and one more touchdown in the fourth quarter to bring the game to its final.

"It was a ballgame where we let a lot of opportunities slip by. Plenty of opportunities to get back in the game or take the lead in the game. We didn't do a good job of taking advantage of those opportunities. When you're playing a team like Central Florida, a good football team, and when you're playing in the game that can be program changing for you, you've got to make those plays when they come your way. We didn't do a good job of playing complimentary football and helping each other out, offense, defense, and special teams. That's on us. We have to find a way to do better in the second half, especially offensively. We didn't do anything in the second half. In the first half, we did a good job of running the football. In the second half, we didn't do anything. That can't happen, and defensively we have to get off of the field on third down. (There is) A lot of work for us to do to get better and I'm looking forward to our guys working to fix those issues."


The Owls will now head out on the road for the next two games. A matchup with Purdue awaits next Saturday, followed by a trip to North Texas on October 1. After a bye week, Florida Atlantic returns to FAU Stadium October 15 against Rice for a 6:00 PM kickoff.