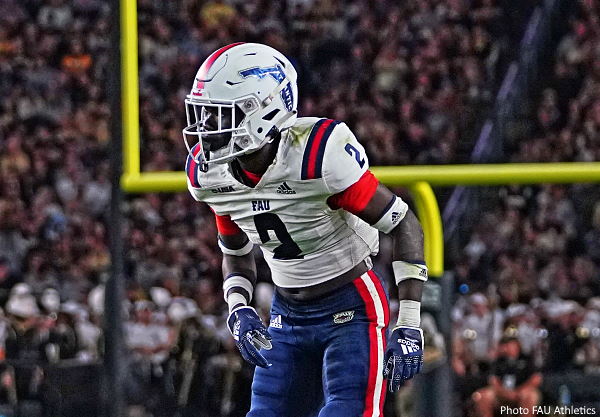 After receiving the opening kickoff, Purdue scored on its first drive of the game when the Boilermakers' Austin Burton connected with Charlie Jones for a seven-yard score . The Owls responded to open the second quarter with a Morgan Suarez 27-yard field goal to bring it within four.

After forcing a Boilermaker punt, N'Kosi Perry connected with a speedy LaJohntay Wester, who broke away from the Purdue defender to catch the 13-yard dart in the back of the endzone. FAU had its first lead of the night at 10-7 with just over five minutes to go in the opening half. The Owls then forced the turnover on downs before tacking on three more off a game-long 39-yarder from Suarez (13-7).

Down 21-20 with 11 minutes to go in the fourth quarter, the Owls were knocking on the door at the Purdue 18-yard line. Perry connected with Je'Quan Burton, but a personal foul penalty nullified the FAU score to replay the second down. Just two plays later, Purdue's Chris Jefferson intercepted Perry at the Purdue 10 and returned it 55 yards to flip the field and give the Boilermakers the ball at FAU's 35-yard line. Purdue would put it in the endzone on the ensuing drive off a four-yard completion from Burton to TJ Sheffield.

Down by eight with just over five minutes to play, Perry hit Wester for the third time in the contest and broke a pair of tackles to bring the Owls within two (28-26). The two-point conversion would be unsuccessful, however, and Purdue fended off the FAU comeback attempt.

"We're not going to be excited about moral victories, but our football team showed that they can compete", Taggart said. "When we compete for four quarters, we can play with anybody. We are excited to get back in league play and excited to hopefully get some guys back and be ready to play. Again, as long as we play for four quarters like we know how and compete, we're going to have a chance in every ballgame."


The Owls remain on the road next weekend as they head to the Lone Star State to face North Texas. Kickoff is scheduled for 4:00 PM and the game will be available on ESPN+.