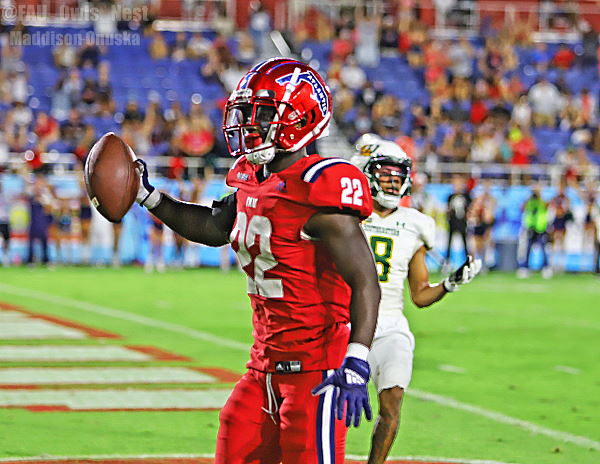 After lightning in the area delayed kickoff by just over 90 minutes, the Owls started fast, marching into SLU territory on the opening drive. The Lions intercepted a N'Kosi Perry pass, however, to delay the game's first score.

After the defense turned the Lions away with a three-and-out, the offense marched 80 yards and finished it off in the end zone this time. A career-long 58-yard run by Larry McCammon set the tone, and three plays later, Perry hit Zuberi Mobley on a 14-yard screen pass for a touchdown.

The Owls broke it open with touchdowns on each of their first two drives in the second quarter. Perry found LaJohntay Wester on a 36-yard score to make it 14-0 and then scampered for a two-yard run himself on the next drive to open up a 21-3 advantage.

Just before halftime, FAU cashed in on another 80-yard drive culminating with a one-yard run by McCammon as time expired in the quarter.

The third quarter became the Zuberi Mobley (photo) show as the redshirt freshman torched the SLU defense for 83 yards and a touchdown on just nine carries. The Owls' scoring was capped off in the fourth with one more long Perry to Wester touchdown pass. The 42-yard strike put FAU up 42-3 at the time. The Lions would register a late consolation score to bring the game to its 42-9 final.

"It was a really good bounce back game for us. I'm really proud of our football team", said Head Coach Willie Taggart. "All week we talked about going out and fixing our problems, fixing the issues that we had the week before. I felt that our guys bounced back and did that.


The Owls will next play host to Central Florida Saturday night at 7:30 PM at Schnellenberger Field.