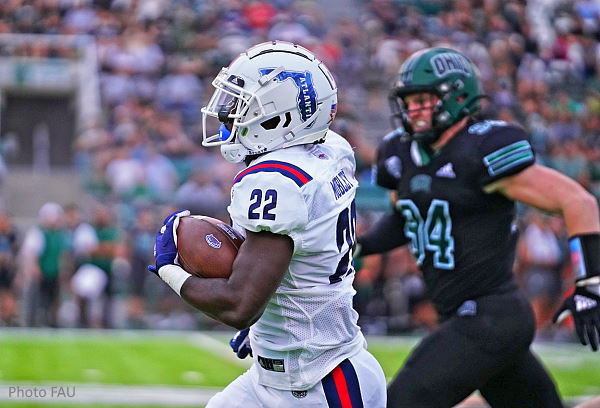 The Owls scored on their opening drive as N'Kosi Perry connected with a diving Je'Quan Burton on a 20-yard touchdown pass near the pylon to put FAU in front 7-0. After a muffed punt, Ohio got the ball back at the FAU 12-yard line, but the defense locked in to hold the Bobcat offense to just a field goal and maintain a four-point FAU advantage (7-3). Suarez nailed a 24-yarder to extend the Owls lead back to 7 to close out the opening quarter, 10-3.

Ohio's Kurtis Rourke posted his first score of the game to open the second quarter, tossing a six-yard pass to Sam Wiglusz to even the game at 10 apiece. FAU responded on their next drive as Perry connected with a wide-open Jahmal Edrine for a 16-yard score to push the Owls back in front, 17-10. FAU's defense sacked Rourke on a 1st and 10 from the FAU 16-yard line to eventually force an Ohio field goal and take a 17-13 advantage into the locker room.

The Bobcats took their first lead of the contest out of the halftime break as Rourke connected once again with Wiglusz for a five-yard score (20-17). With just under five to play in the third, Ohio extended its lead to 27-17 on a one-yard touchdown pass from Rourke to the Bobcats' Miles Cross to close out the third.

Rourke kept it to score a two-yard rushing touchdown to push Ohio's lead to 34-17 with 12:20 to play in the contest. However, the Owls offense started clicking again as FAU scored on their following drive. Perry connected on a pair of first downs to Edrine before threading one through a pair of defenders to Tony Johnson to get the Owls back on the board, 34-24. Rourke and the Bobcats responded at the 7:10 mark as the quarterback completed a 15-yard pass to James Bostic to kick Ohio's lead back out to 41-24.

After the touchback, Perry connected on a huge 57-yard pass to Burton, who ran out of bounds at the Ohio 18-yard line to put the Owls in the red zone once again. Two plays later, Perry hit Edrine for his second score of the day to cut the Owls deficit back down to 10, 41-31. The Owls forced a Bobcat punt, which LaJohntay Wester returned 41 yards from the Ohio 48-yard line to put the Owls at the Ohio seven-yard line and knocking on the door once again with just over four minutes to play. On the next play, Perry connected on his fifth touchdown pass of the day, completing a seven-yarder to Wester to bring the Owls back within three, 41-38. However, FAU just ran out of time as the game eventually closed to its 41-38 final.

 Perry finished the day 23-for-41 for 346 yards and five passing touchdowns
 Burton led the Owls' pass catchers with 115 yards on five receptions, including a game-long 57-yarder, and a touchdown
 Edrine recorded a pair of scores for the Owls, tallying 87 yards on a game-high eight receptions
 Larry McCammon III finished with 60 yards on 14 carries and added 36 receiving yards on two receptions
 Eddie Williams and Jayden Williams led the Owls' defense with 15 and 11 total tackles, respectively
 E. Williams recorded three solo tackles, to go along with a sack and two tackles for loss
 J. Williams posted a game-high five solo tackles
 Suarez finished 1-for-1 on field goals with a 24-yard boot
 Punter Riley Thompson had four kicks for 155 yards, including a game-long 47-yarder