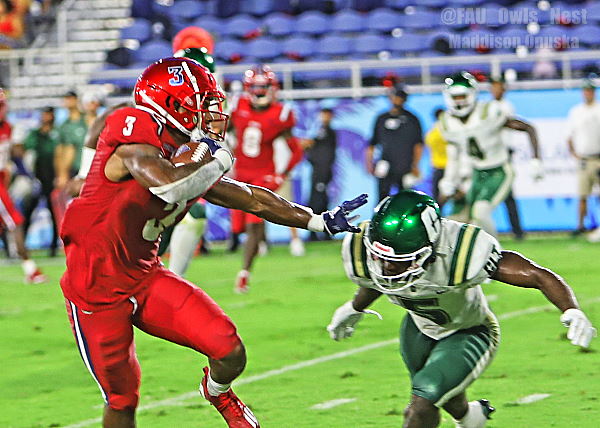 The Florida Atlantic University football team cruised to a 43-13 win over Charlotte to open the 2022 season at home on Saturday night.

Charlotte opened the scoring on the first drive of the game. A 52-yard pass from Chris Reynolds to Grant DuBose briefly quieted a raucous FAU Stadium crowd. The Owls offense didn't take long to respond though. On the ensuing drive, Larry McCammon III broke off a 52-yard run and hit paydirt to tie it at 7-7.

After two Morgan Suarez field goals and a two-yard N'Kosi Perry touchdown run, the Owls were in control. It was the defense, however, that struck for the game-changing play just before halftime. As 49ers quarterback James Foster was forced from the pocket, his intended pass to his tight end was too high. It bounced off the receiver's fingertips and into the hands of a waiting Justin McKithen. The sophomore returned the interception 63 yards to the house. With 17 seconds left before halftime, the Owls had a commanding 26-7 lead.

A 30-yard touchdown pass from Perry to Je'Quan Burton on the first drive of the third quarter further cemented the Owls grip. Zuberi Mobley would later punch in a one-yard run to put the Owls up over 40 points for the night. Suarez tacked on two more second half field goals.

"I'm proud of our football team and the way we went out and performed today. I was proud of how we went out and took care of business in all three phases", said Head Coach Willie Taggart. "I'm really pleased with our guys and how we responded after the first touchdown that Charlotte scored. That's something that we've talked about all training camp, how to deal with adversity and when things don't go our way. We haven't been good with that in the past, so that is something that we needed to overcome."


The Owls will hit the road to Athens, Ohio next Saturday for a meeting with Ohio University. They return home September 10 when Southeastern Louisiana comes to town.