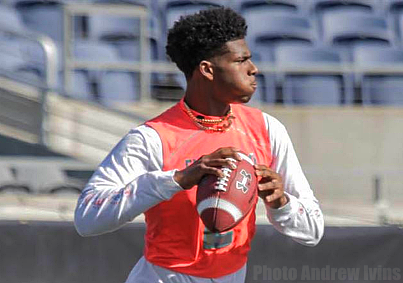 Florida Atlantic football has landed one of, if not the biggest, verbal commitments in program history.


Trinity Christian-Cedar Hill High School star Quarterback Shedeur Sanders has shocked the college football world by choosing the Owls despite multiple "Power 5" offers - with the decision ultimately coming down to FAU and Louisville, with some late interest from Alabama.

Like his father, NFL Hall of Fame cornerback Deion Sanders, Shedeur has become a human highlight reel throughout his high school playing career. The Class of 2021 star has thrown for 8,796 yards and 123 touchdowns, with just 19 interceptions since starting as a true freshman.

He was given an invite to Under Armour's Future 50 all-star game earlier this year after leading his team to their third straight Texas Association of Private Schools Division II title.

Sanders' commitment can be attributed to both his and his father's long-standing relationship with FAU Head Coach Coach Willie Taggart, Outside Linebackers Coach & Recruiting Coordinator Raymond Woodie, and Director of Player Personal David Kelly.

"When I went there, Coach Taggart just showed a lot of love," Sanders told 247Sports' Chris Nee when asked about a visit to Florida State in 2018. Taggart was the Head Coach of the Seminoles from 2018-2019, the same program where father Deion Sanders become a two-time All-American.

With a 247Sports' industry-generated composite rating of .9148, the four-star prospect ranks as the nation's 14th best pro-style quarterback.

Such rankings would also make Sanders the highest-rated high school prospect to sign with the Owls. That title was previously held by Class of 2019 OLB Diamante Howard with a rating of .8675.

Current FAU quarterback and Texas native Chris Robison had a .9272 rating by 247Sports out of high school, but came to Boca Raton as a transfer from Oklahoma after enrolling early in Norman.

Already with 19 pledges, the Owls have the number one class in ranked class in Conference USA. Sanders' commitment will likely all but guarantee FAU will finish with the conference's top class - should they hang on to their current commits.

As always, stay locked in with FAU Owls Nest for all your FAU Football recruiting coverage.