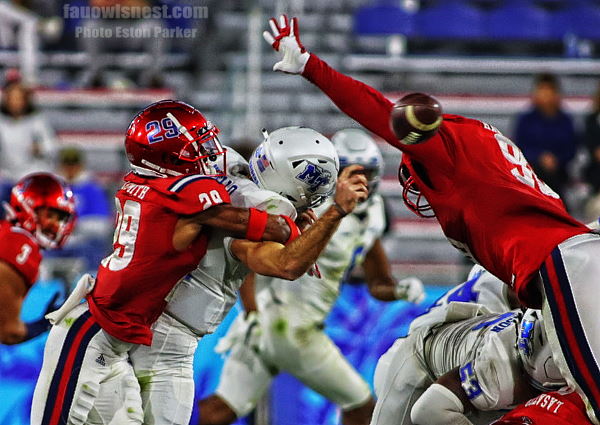 Within one month, FAU has gone from conference championship hopes to failing to make a bowl game.

The Owls (5-7, 3-5 C-USA) fell to Middle Tennessee Saturday night 27-17 thanks to a 24-point run from the visitors. Unfortunately, this also occurred on senior night for many FAY players. The loss means Willie Taggart's ballclub will fail to see the post-season on the back of a four game losing streak, two of which coming at home.

A rare fast start gave FAU confidence early in the contest. Je'Quan Burton hauled in his lone completion three minutes into the evening with a 48-yard bomb from N'Kosi Perry. The eight play, 75 yard drive was followed up with four straight three-and-outs from the MTSU offense. The Owls defense held the visitors to just four yards gained in the first quarter.

The second quarter started just as well as the previous with senior John Mitchell making a gorgeous diving catch in the endzone to cap off a reverse flea-flicker from Perry. The play was set up by a 48-yard punt return from LaJohntay Wester to the MTSU 32 yard line.

The Owls' defense prevented Middle Tennessee (6-6, 4-4) from entering FAU territory until midway through the second quarter. That drive halted once the Blue Raiders entered the redzone. Still, MTSU chipped into FAU's lead with a 23-yard field goal to take a 14-3 deficit into halftime.

FAU worked quickly from the break as another MTSU punt gave way for the Owls' best drive since the opener, spanning nine plays and 72 yards. Disappointingly, the promising drive slowed once inside the Blue Raider redzone, cultivating in a 23-yard field goal from freshman Morgan Suarez.

Once again leading by 14 points, the Owls looked to be in cruise control to close out the contest as MTSU failed to score on the previous eight drives barring a single field goal. Alas, FAU failed to kill the game off. Four straight punts gave MTSU ample time to begin their comeback effort.

The atmosphere around Howard Schnellenberger Field harkened to the late game collapses akin to the Carl Pelini and Charlie Partridge eras as the Owls gave up 17 points in the final period. The fourth quarter alone saw an MTSU field goal, go-ahead passing touchdown to a defensive lineman, and finally a fumble recovery for a touchdown. The two touchdowns came less than three minutes apart from one another and with less than five minutes left in the game.

MTSU rode their 24 unanswered points to bowl eligibility, forcing the Owls to stay home in the postseason for the first time since the 2018 campaign.

The disappointing result dwarfs a special accomplishment from FAU's LaJohntay Wester. His 14 completions set a new program record for catches in a single-game.