Takeaways From FAU's 28-25 victory over UTEP 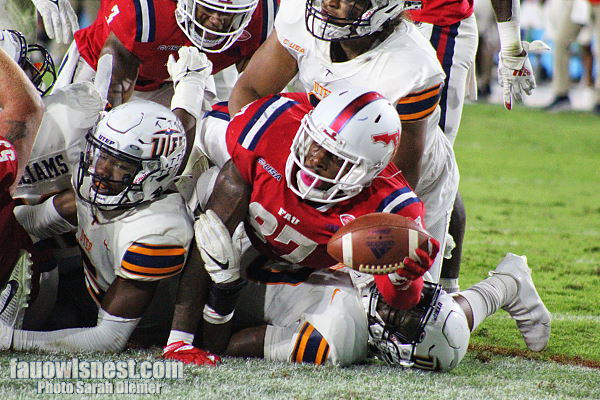 With two UTEP touchdowns in a 48-second span, FAU was tasked with holding a three-point lead - and they did, winning 28-25.

After UTEP kicker Gavin Baechle kicked a 24-yard field goal with 6:41 to go in the first, FAU took its first lead of the night with a 27-yard touchdown rush by Johnny Ford to make it a 7-3 ballgame just under four and a half minutes later.

With 1:42 left in the second quarter, UTEP would take its first lead of the night with a 23-yard connection from Gavin Hardison to Trent Tompson to make it a 10-7 game.

That lead only lasted 1:40, as with two seconds to go in the half, N'Kosi Perry had his first big strike of the night to give the Owls the 14-10 lead at halftime.

In the third quarter, Jordan Helm notched an interception with 6:01 to go, setting up the Owls at UTEP's 13 yard line. FAU tight end Zaire Mitchell-Paden [photo] would pick up a fumble in the endzone to put the team up 21-10.

UTEP wouldn't get close to scoring again until they attempted a 42-yard field goal with 1:19 to go in the fourth quarter, which Baechle missed.

FAU would extend its lead to 28-10 with a one-yard touchdown rush from James Charles with 10:57 to go in the game.

The Miners wouldn't go down quietly, with a five-yard touchdown run by Ronald Awatt to make it 28-16. UTEP would go for two, which Awatt would pick up on a two-yard rush to make it 28-18 with 2:50 to go.

UTEP would attempt an onside kick, which they would recover on FAU's 46 yard line. They'd respond with a 49-yard touchdown throw to Tyrin Smith on 4th and 13 to make it a 28-23 ballgame. FAU would recover the ensuing onside kick attempt this time with 2:01 on the clock.

The victory keeps the Owls (5-3, 3-1 C-USA) in first place in the conferences East Division. They'll fight for sole possession of first place next week, as they take on the Marshall Thundering Herd (5-3, 3-1 C-USA) on Nov. 6, 2021, at 6:00 p.m. The game will be streamed on Facebook - and is likely one of the last FAU games to be placed there with the school's move to The American coming soon.

Here are our takeaways from the win: