Takeaways From FAU's 28-13 Loss To Marshall 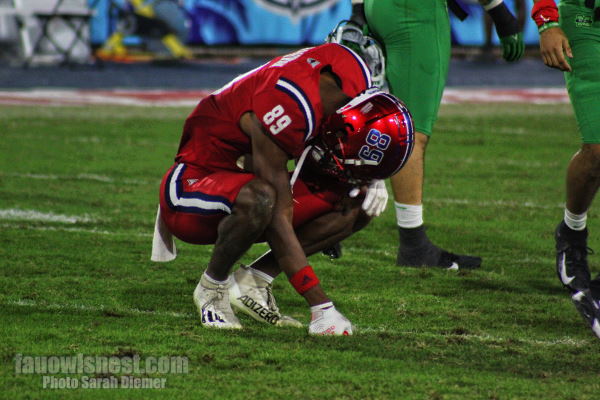 FAU's 12-game home winning streak is over. They fell 28-13 to the Marshall Thundering Herd on Saturday night, a team that now owns an 8-1 record over them.

Marshall came out of the gate roaring, with Jayden Harrison returning the opening kick-off for a 99-yard touchdown. FAU would be able to tame them for the rest of the first quarter.

Starting with a 27-yard N'Kosi Perry touchdown pass to Brandon Robinson [photo] on the very next drive, FAU would score 13 unanswered points. They would force a turnover on Marshall's first possession, with Romain Mungin pulling in his second career interception and his second in two games to set up a 37-yard Aaron Shahriari field goal. A second Shahriari field goal would give the Owls a 13-7 lead.

Marshall would finally answer back with a long 10-play, 75-yard drive following Shahriari's second kick. The drive lasted 4:13 and was capped off with a three-yard Rasheen Alli rushing touchdown with 9:18 to go in the first half.

However, Alli would strike again, this time bursting for a 24-yard touchdown on just the second play of a 28-yard drive with 37 seconds left in the first half.

Marshall would attempt a 40-yard field goal with 10:51 to go to try to go up by three scores, but missed the field goal. FAU wasn't able to do anything with the momentum on the next drive and the Herd held them off of the scoreboard for the rest of the game.

Ford had the best showing for FAU, despite attending a funeral and feeling sick this morning. He rushed for 138 yards on 13 carries for 10.6 yards per carry.