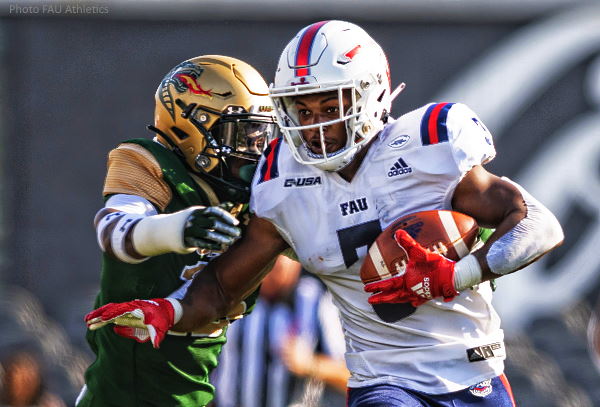 Adversity struck from the moment the Owls first had the ball. After the defense gave up a 10 play, 75-yard touchdown drive that was capped off by a Dylan Hopkins pass to Samario Rudolph, quarterback N'Kosi Perry threw an interception on FAU's first offensive play from scrimmage. The defense would hold the Blazers to just five yards on the ensuing drive, which cornerback Zyon Gilbert capped off with a blocked field goal.

The momentum from that play wouldn't last long, as Perry fumbled the ball off of an exchange with running back Johnny Ford with the offensive line collapsing around him. The fumble was picked up by the defense at FAU's 15-yard line. Two plays later, Hopkins struck again with a 15-yard touchdown pass to Trea Shropshire to put the Blazers up 14-0.

FAU's offense was able to bounce back the following drive, with an 11 play, 90-yard drive capped off with a Perry rushing touchdown to cut the lead in half.  After a defensive stop, Perry would strike again with a two-yard touchdown pass to LaJohntay Wester on a crucial fourth-down play to tie the game at 14. UAB would answer back with a field goal, which FAU followed up with a nine-play, 66-yard drive. That drive ended with a pick-six in the end zone that put UAB up 24-14 at the half.

FAU had an opportunity to make it a one-score game during the first drive of the second half, but Aaron Shahriari missed a 44-yard field goal. The Blazers would hold the Owls scoreless for the entire second half, scoring one more touchdown to secure a 31-14 win. Perry would leave the game in the second half because he was "banged up" according to Coach Taggart. The prognosis was a knee issue and stitches from his throwing hand opening up. He finished the game 16-25 with 193 yards, a touchdown, and three interceptions.

The Owls stayed in the battle yardage-wise, with UAB outgaining them 306-291. FAU had contributions from running back Larry McCammon [photo], who had 43 receiving yards on two receptions. Linebacker Akileis Leroy led the Owls in tackles for the second straight game, notching seven total tackles and adding a QB hurry.

Here are our team's takeaways from Saturday's game:


Given a needed bye week ahead, the team will be afforded some ample time off. This is just what the doctor ordered given the need for Perry to heal his hand, and other players to shore up some knicks and bruises they are also dealing with. They'll need it, as another road game lies ahead - this time on an off-cycle Thursday night in Charlotte.

posted Oct 12th 2021, 2:33 PM
Taggart mentioned during the post game presser that Perry's stitches on his throwing hand became undone, but that is a nonissue this week.

#FAU QB @ko_live5 will NOT be practicing today.@CoachTaggart says he is still limping after a foot injury suffered against UAB. pic.twitter.com/chaeivnCEb

#FAU OC @QBCoachmj on the possibility of @nickyt616 playing next week.

Its great to have a guy who can step in and lead the offense and not miss a step. pic.twitter.com/VcPSW0zJmb

posted Oct 12th 2021, 2:36 PM
Neither backup QB Nick Tronti nor N'Kosi Perry had very many reps during practice today, most of the offensive drills were ran through Willie Taggart Jr. and Michael Johnson Jr.

The level of concern is seemingly low right now, but more to come.

Contrary to what @CoachTaggart said this morning, #FAU QB @ko_live5 is here at practice! pic.twitter.com/xot9VSBgsS

posted Oct 14th 2021, 1:07 PM
Taggart mentioned that there's no word on if either Perry or Tronti will be ready for next Thursday's game and he mentioned that "the young guys" (Johnson Jr. and Taggart Jr.) both looked great during practice this week.

Hes not 100%, hes using this week to heal and lead. pic.twitter.com/JZkxmrWdmF

posted Oct 14th 2021, 1:07 PM
Coach Taggart mentioned Armani-Eli Adams as a guy who has impressed him in Helm's absence.

He's not 100% and his status for next Thursday is in question. pic.twitter.com/RLbkL01fTl