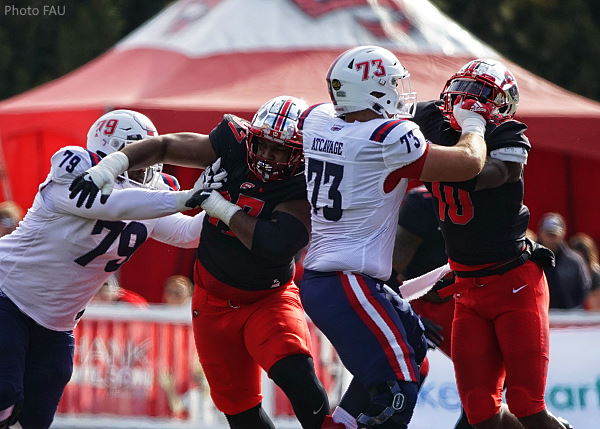 With a loss to WKU the Owls now have to win against the Middle Tennessee Blue Raiders next week in order to become bowl eligible. If not, their season is officially over on Nov. 27.

After Florida Atlantic (5-6, 3-4 C-USA) went three-and-out, Bailey Zappe and the high-powered Hilltopper offense drove down the field for an 87-yard drive. Zappe had 92 passing yards, with WKU taking a false start penalty on the first play of the drive, while Jerreth Sterns had 54 of those receiving yards, capping it off with a one-yard touchdown off of a screen pass.

On the issuing drive, Brandon Robinson appeared to have reached the ball past the goal line, but his foot was out of bounds before he could do so. The ball was spotted on the three yard line and FAU's offense could not capitalize on the first and goal situation, being pushed back 14 yards, forcing a field goal. Aaron Shahriari made the field goal to make it a 7-3 game.

Western Kentucky (7-4, 6-1 C-USA,) answered back with yet another touchdown drive, with Zappe finishing a three-play, 50-yard drive with an eight-yard strike to Mitchell Tinsley to make it 14-3. The Hilltoppers struck again after another failed Owls drive to make it a 21-3 game.

With Western Kentucky at FAU's 42 yard line, Teja Young swiped the ball away and returned it for a 62-yard pick-six to make it a 21-10 game with 7:58 to go in the first half, giving FAU some life. That life was shortlived, as WKU put up 10 unanswered points to give them a 31-10 halftime lead.

FAU would strike with the first score of the second half, a 9-yard touchdown pass to John Mitchell, but 21 unanswered WKU points would put this game way out of reach for the Owls.

JeQuan Burton had one of his best games for the Owls, bringing in seven catches for 80 yards on 10 targets, notching an average of 11.4 yards per catch.

Defensively, Jordan Helm had yet another monster game, racking up 12 tackles, a pass breakup, and a fumble recovery.

Florida Atlantic will be back in action on Saturday, Nov. 27 at 7 p.m. for their final regular-season matchup against the MTSU Blue Raiders. The game will be broadcast on Stadium and The CW.