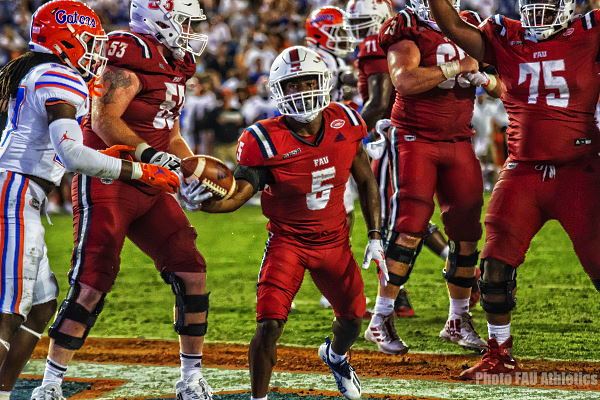 Florida Atlantic was upended by the Florida Gators in the season opening game for both teams late Saturday night. The Owls showed flashes of promise, but could not bring the total package together in order to upset the 13th nationally ranked Gators.

The hosts scored on their first two drives of the evening before an Diashun Moss interception in the endzone and a turnover-on-downs brought the end to the half.

The scoreline eventually doubled to 28-0 when the Owls' found paydirt for the first time with a two yard run up the gut from Johnny Ford.

The Gators quickly answered before the Owls scored the final touchdown of the evening with a 13 yard pass to Brandon Robinson.

All in all, the Gators outgained the Owls 553-353 yards. The majority of UF's gains came on the ground, with a season opener record 400 yards gained.

Here are the Owl's Nest Team's takeaways from the game:


The Owls will return home to Paradise to face Georgia Southern. The Golden Eagles beat Gardner Webb 30-25 Saturday night thanks to a 178 yard rushing day from Logan Wright.

FAU lost to Georgia Southern 20-3 in a COVID postponed game in Statesboro last season, despite the Owls playing as the better team.

Chase Lasater is expected to return for the Owls for next weekend's tilt against the option running threat of the Golden Eagles, and offensive lineman Andrew Boselli is possible.