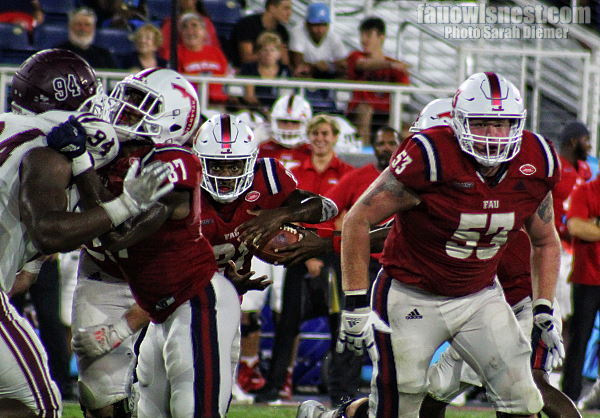 Florida Atlantic survived a third-straight slow start offensively to grab hold of a 45-14 victory over Fordham on Saturday night. The game's start time was delayed from 6:00 to 7:15 after a lightning strike eight miles away from FAU Stadium forced the game to be postponed. The field wasn't impacted by rain, as there wasn't a drop of rain at FAU Stadium leading off to kickoff.

They held the Rams to just 29 yards rushing, which stays true to the "Sea of Red" mentality cornerback Korel Smith mentioned on Wednesday before practice.  "I would like to swarm the ball more, see a 'Sea of Red'," Smith said. "We gotta have all 11 guys to the ball, attacking the running back or whoever has the ball, and it will cause turnovers too." FAU's defense held true to those words, holding Fordham to 1/16 on third-down conversions and forcing two interceptions.

FAU struck first after two three-and-outs with N'Kosi Perry finding the end zone on a two-yard quarterback draw with 5:13 to go in the first quarter. Both defenses held firm throughout the first half until Fordham's Tim DeMorat found Fotis Kokosioulis for a 14-yard touchdown pass with 11:18 to go in the second quarter. The deadlock would continue until Larry McCammon powered through the Rams' defense on a six-yard run to put the Owls up 14-7. They wouldn't trail from that point on.

The Owls would get the first two scores of the second half to take a 28-7 lead. LaJohntay Wester opened up the second half scoring with a 25-yard touchdown reception from Perry just over four and a half minutes into the third quarter. Wester would finish the games with 10 receptions and 101 yards, becoming the first Owl to have back-to-back 100-yard games since Jovon Durante did in 2018. "His football IQ is so good," Perry said about Wester. "I feel like we have that chemistry." T.J. Chase would find the end zone with 4:!2 to go in the third quarter to extend the lead.

After a huge 48-yard touchdown pass from DeMorat to Dequece Carter that got Fordham back into the ball game with 9:45 to go, the momentum would swing back FAU's way. On the next drive, the Owls capped off a six-play, 52-yard drive with a two-yard rushing touchdown from Kelvin Dean Jr. (photo center), the first of his career. Just 16 seconds later, Teja Young would return an interception 22 yards to the end zone to make it 42-14. Aaron Shariari would extend that lead to 45-14 with a 23-yard field goal with 2:08 to go.

Today's win extends FAU's home winning streak to 10, which ranks ninth in the nation. They haven't lost at Howard Schnellenberger Field since falling 36-31 to Marshall on Oct. 18, 2019.