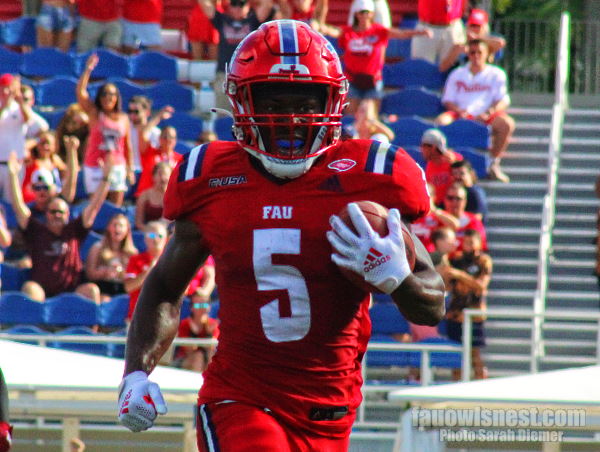 FAU (3-2, 1-0 C-USA) won its 5th Shula Bowl in a row, defeating the FIU Panthers (1-4, 0-1 C-USA) by the score of 58-21. Quarterback N'Kosi Perry led the Owls' offense, throwing 18-21 with 329 yards and three touchdowns. He only played three quarters, finishing the day with an 86% completion percentage. Johnny Ford [photo] rushed for 102 yards and a touchdown, adding another 91 yards through the air and a second touchdown, totaling 193 yards on the day.

It started off as a back and forth affair, with the Owls striking for their first opening-drive touchdown of the game to take a 7-0 lead just 1:08 into the game. Quarterback N'Kosi Perry capped off that drive with an eight-yard touchdown run to take that early lead. FIU followed that score up with a touchdown rush of their own by running back D'Vonte Price seven minutes later, tying it at seven. The defenses would hold on throughout the quarter to keep the game tied after the first quarter.

The offenses exploded in the second quarter, with FAU running back James Charles capping off a five-play, 80-yard drive just 24 seconds into the quarter to put the Owls up 13-7. Willie Taggart Jr. was stopped short of the end zone on a two-point conversion to keep the score that way. Two minutes later, FIU quarterback Max Bortenschlager found wide receiver Randall St. Felix for an 11-yard touchdown pass to make it a 14-13 ballgame.

Perry's arm produced two unanswered touchdowns to give FAU a commanding lead, firing a dot in the corner of the end zone to tight end Zaire Mitchell-Paden to start, when finding Johnny Ford for a huge 89-yard pass to give the Owls the 27-14 lead.

FIU wide receiver Tyrese Chambers would finally answer the bell with a 68-yard touchdown reception from Max Bortenschlager to make it 27-21 with 4:54 to go in the first half. Then, Perry found speedy wideout Je'Quan Burton for a 42-yard touchdown three minutes later to give the Owls the 34-21 lead heading into halftime.

After an Aaron Shahriari field goal to open the second-half scoring, FAU quarterback Nick Tronti joined the scoring party with a five-yard touchdown to make it a 44-21 game with 1:49 to go in the third quarter.

FAU's defense would not allow a score in the second half, holding the Panthers to just 115 total yards of offense in the process. The offense added two more touchdowns to make it a 58-21 final score.

Here are our team's takeaways from the exciting win: