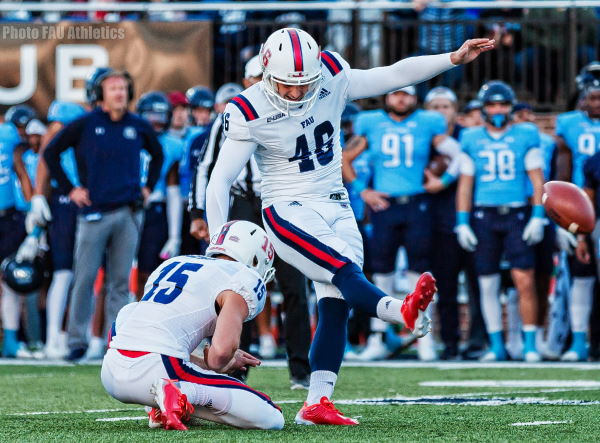 FAU's loss to Old Dominion (4-6, 3-3 C-USA) took one of the strangest turns a college football game has ever taken.

After the Owls  (5-5, 3-3 C-USA) took the lead with an Aaron Shahriari [photo] field goal, Old Dominion drew a safety two drives later to make it a 3-2 game. That score held until Old Dominion forced yet another safety on an intentional grounding with 5 minutes to go in the second half to make it a 4-3 ballgame.

With 33 seconds to go, a touchdown was finally scored. ODU running back Blake Watson just got to the pylon before losing possession of the ball at the end of a 12-yard rush to put the Monarchs up 11-3 at the half.

After another ODU field goal, the Owls found themselves down 14-3 and still couldn't get much going. That was the case until N'Kosi Perry found Brandon Robinson for a 59-yard bomb to make it a 14-10 ballgame with 6:40 to go in the third quarter.

FAU held the Monarchs to a red-zone field goal for the third time in the game, with ODU coming out to a 17-10 lead with 3:44 to go in the third quarter after converting it. The Owls didn't take advantage of the preservation of the one-score deficit, fumbling away the football just 1:22 later. The Monarchs would get all the way down to FAU's two yard line, but the Owl defense held strong again and forced another field goal, making it a 20-10 game with 10 seconds to go in the third quarter.

Johnny Ford would take over on the ensuing drive, punching in a two-yard touchdown after coming up with a huge catch on a 39-yard pass. The extra point attempt was blocked and returned for a score afterward, making it a 22-16 game with 10:58 to go.

FAU held ODU to a three-and-out on the following drive, but they would go three-and-out themselves. In the next possession, the Monarchs drove down the field and struck with a 14-yard touchdown pass, also adding on a successful two-point conversion to make it a 30-16 game.

Johnny Ford had his usual standout performance, rushing for 101 yards and a touchdown on 19 carries while the safety tandem of Jordan Helm (16) and Teja Young (11) combined for 27 tackles.

The Owls will be back in action on Saturday, Nov. 20 as they take on the Western Kentucky Hilltoppers. Kickoff will be at 12:00 p.m.