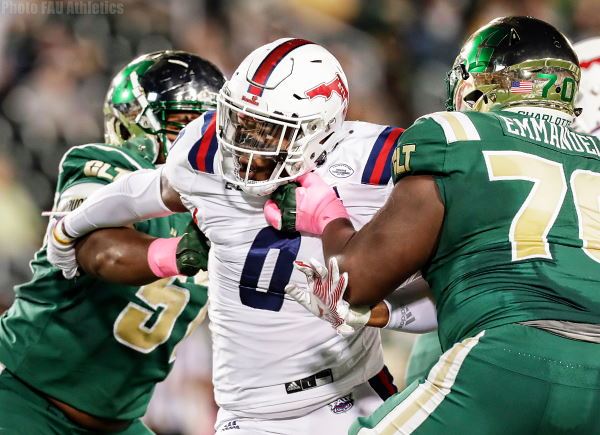 Once again on Thursday night, a contest started off rocky for the visiting Owls. An early fumble inside Charlotte territory resulted in a 49ers field goal the other way.

However, this time they would use 31 unanswered points to upend 49ers.

FAU took the lead for the first time with an 8 yard touchdown catch to TJ Chase in the corner of the end zone.

The Owls 7-3 lead was short lived as the hosts marched downfield on a 17 play, 88 yard drive, capped off with a fourth down touchdown pass as the first half expired.

Charlottes Jonathan Cruz, the same kicker that nailed a 50+ yard field goal as time expired in the 2018 contest between the two teams, preventing the Owls from becoming bowl eligible, missed the following extra point attempt for a 9-7 Niner lead at the break.

Willie Taggarts Owls raced out of halftime with a four play, 65 yard touchdown drive. Johnny Ford got his first of two scores on the night with a 32 yard catch and run from a screen play to NKosi Perrys left. This began the onslaught of 31 straight points for the Owls.

Malcolm Davison found paydirt for the first time of the season about five minutes later thanks to a nine yard scamper.

The Owls defense three turnover benchmark was hit, as a Caliph Brice fumble recovery in the second quarter was paired with back-to-back interceptions late in the third and early in the fourth.

Korrel Smith did well to jump in front of a Chris Reynolds pass, setting up Brandon Robinson for a 30 yard play-action pass today on the following play.

Ahman Ross got his first pick of his career just plays later. His return into Charlotte territory allowed Aaron Shahriari to knock in a 27 yard field goal.

Ford capped off the night with a one yard scoring run, fresh off the back of a 60 yard scamper the play before.

The victory moves the Owls (4-3, 2-1 C-USA) into first place in the conferences East Division.

Here are our takeaways from the win:


FAU will have a few extra days to get ready for incoming UTEP, who is far outmatching season expectations at 6-1. The contest will kick-off Saturday, October 30th, at 6:00 PM and is currently slated to air on ESPN+.