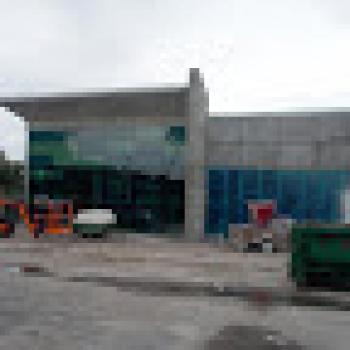 Swung by campus yesterday to check on the recent developments.

The Centre Marketplace addition is finishing up and should be ready for people by the end of next month.


Here's a rendering showing off what looks to be... a coffee and tea bar? Not really sure what to make of it. This space also looks very much like the sandwich bar space just to the left after you enter... not sure why they'd give that up to convert it to whatever this is...


Here's a somewhat blurry shot showing what the inside of the Centre Marketplace looks like right now.

These are great posters that are up in various places (including several places in the Student Union) promoting 4-year graduation, a percentage we definitely need to improve here at FAU to move up in the rankings.
There were also a lot of framed posters from Program Board concerts in the recent past hanging up on the second floor of the Student Union. It underscored how much entertainment SG has provided to the students and what caliber bands we could get here.

As you probably know, Coyote Jack's is now becoming "The Burrow Bar & Grill." There's a sign on the doors saying "closed over summer." Doesn't look like they've done much (if anything) inside right now. The Student Union itself is supposed to get some new furniture as well, though the formal expansion is a No Go according to an SU manager "because Rick Scott vetoed our money." So that's another year off at least, though when it does happen the first consideration will likely be to create a second floor of additional meeting rooms for the Live Oak Pavillion. The Brian Keintz (old SU director) plan to divide up the Grand Palm to create a space for the gamers since they were displaced by the New era salon has been shelved since the space is in high demand right now. I believe it will be divided up eventually since any northward expansion of the existing Union would likely have to take over the grass performance space and creating a hallway through the Grand Palm is the best way to access that space.

Moving on to the rest of campus, the Breezeway floor has been repainted. Same color. Nothing new there, same thing happens every summer to keep it fresh. No new developments along the Breezeway save for a few more tables adjacent to Business East. So nothing to show there. At the north end of the Breezeway, however, one could find this construction fence on the southwest side of the Rec Center...


And here's the project area. I'm told it will be a new fitness classroom space.


Here are two renderings of the new Innovation Village Parking Garage. Not sure if you've seen them already or not. Have to say I'm still very disappointed that the retail component will not be in place when this garage is finished... apparently because it would have delayed construction and they wanted to open it during the Fall semester (could be as late as November)


It's a little out of view in this rendering but if you look in the lower left-hand corner you can see the new traffic signal intersection. It looks like the only entrance will be on the west side of the garage. Not sure how this will work out for gameday parking in the future but I'm sure it won't be free...


For those of you who haven't been on campus in a couple years, the Education building got a new paint job a little while back. It used to be mostly white.


And finally, Volusia Street - the street you take from Parking Garage 1 toward the Burrow/baseball stadium - got a couple spirit banners when President Obama came to speak. Always a nice touch.

- Parliament Hall: Housing has put up a great photo album on their FB page showing off progress on the new dorm. Might want to bookmark that and reference that going forward. Much better shots than I can get you so I'm going to turn it over to them.
- Student Union Expansion: on hold.
- Breezeway Renovation: Nothing substantial yet, just a repaint. They do have the money for it though.
- Campus Rec Expansion: In progress, adding new fitness room. A plan to add more volleyball, tennis and basketball courts is on HOLD because of money.
- Baseball Stadium Renovation/New Stadium: Pat Chun told media it was "third priority" behind New Academic Center and Weight Room. To be fair, that does service ALL sports as opposed to just one. The $1M baseball stadium renovation project that was proposed has dropped off the Construction List; it would have been a joint contribution between the university and Athletics.
- New Basketball Arena: Nothing new on this front. See above.
- 20th Street/University Blvd: FAU and the City recently met to express their mutual interest in making this project happen. only thing that really came out of it was pointing out that they were both on the same page and that they needed to meet again in the near future. I'll keep an eye out for any Boca legislation that would formally change the name.

Guess that's it for now. As always,