"Welcome to Conference USA! ...you guys are gonna upgrade your facilities, right?" 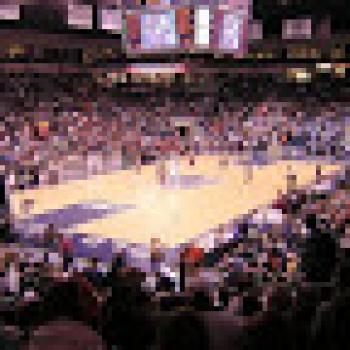 As soon as news broke about FAU accepting an invitation to Conference USA, people began wondering what this meant for the development of Athletics facilities in the near future. Athletic Director Pat Chun has mentioned a forthcoming Master Plan for Athletics, and while no one's entirely sure what that will encompass (beyond the new Academic Services Center), you have to think that a new basketball arena has to be the top priority even if we aren't selling out the Burrow.

(A new baseball stadium is obviously very important too but even Coach McCormack acknowledged that when it comes to facilities, there's a pecking order and baseball is third on the list behind football and basketball. It's a favoritism rooted in revenue, nothing personal)

What's wrong with the Burrow, exactly? It has a team store, renovated locker rooms and club boxes, right? Not such a bad place. Well, compare it to Old Dominion's "Ted Constant Convocation Center":

Thanks Wikipedia.
Or exiting member UCF:

Thanks Wikipedia.
So that's the kind of thing we need to be "big time", regardless of whether we can fill it now or in 10 years. For instance, UCF's new arena has a 10,000 person capacity but averages 5,723 fans as of the 2011-2012 season. They've hosted good teams like Memphis and come very close to a sell-out, but still, it's a little over half full on average.

Now, you may remember that back in 2006 FAU held the Innovation Village Workshop to decide what they were going to do about the various options: open air stadium, domed stadium, what type of arena, what size. They looked at a number of basketball arenas ranging from 7,000-15,000 seats costing anywhere from $23M-62M.

The most oft-cited comparison is the "new" basketball arena at UCF which cost them just shy of $60M. The adjusted 2009 construction cost per seat was about $7K, in case you wanted to scale the numbers to your own estimate. For instance, if you think FAU would only need 7,500 seats at $7K, you're still talking $52.5M. Troy recently opened a new 5,200 seat arena at a cost of $40M ($7692/seat)

At the time of the workshop, FAU actually estimated that a 10,000 seat "Convocation center" would cost them $67.1M, but I'm sure we could get a price under that (say $60M) since there isn't a lot of architecture/construction work going around these days. The bond issue amount would have been ~$75M with an annual projected debt service of $5.6M. These numbers are obviously fluid, but they're representative enough as placeholders to have you understand what kind of numbers we're dealing with here.

So the question becomes... where is that money is going to come from? I'm not a Finance guy but:

- I doubt we could setup another Crocker Partners-type deal that got us the seed money for the football stadium.
- We could always sell naming rights but that's become a punchline for the football stadium, so needless to say we can't really depend on that.
- We could rent out the arena for concerts or conventions. It would certainly be a more fitting venue that a football stadium for the simple reason that it's a lot easier to do a show inside than outside. This was figured into the projections at about $1M a year.
- Bodybag games! That's how we're helping to pay back the football stadium, after all. We'll just play bodybag games. It's been difficult to find good payout data on what it costs for FAU basketball to serve as sacrificial lambs to people like the Tar Heels, but I'm betting it's less than the ~$1M/game FAU seems to be getting for sending their football team in to face the SEC.
- Season tickets and parking revenues. Yes, eventually. But not with today's numbers.

Obviously for this thing to pay for itself we need to utilize it as a multipurpose facility. Concerts, conferences, shows, weddings... whatever you can get to book that space. FAU will try to get the state to chip in money by holding events like graduation and Freshman Convocation there to argue that the facility will be used for academic purposes as well.

There are people at FAU who are very good with moving money around and plotting stuff like this. I'm sure FAU would consider using a large portion of this multimillion dollar revenue share and apply it towards savings for a new arena.

Even if we had a financing plan worked out, by the time we go through architecture and tweaking the design and permitting and construction and yadda yadda yadda, I think the soonest we could open a new basketball arena is 2015. The workshop estimated it would take about two years. So 2015, 2016... hopefully not too much later than that.