5 Franchises That Should Open Near Campus 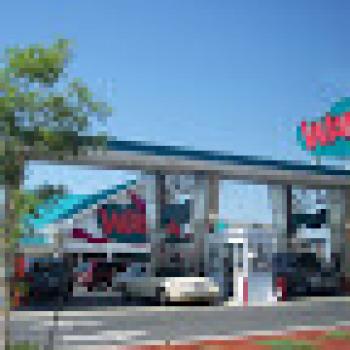 Next year, the the highly-regarded Shake Shack will open right across the street from campus in University Commons. Not only do they make great food (including awesome cheese fries) but they'll also have an outdoor patio area, giving students their first opportunity to chill outside at University Commons to enjoy a burger and a beer with friends. Residential students have complained about a lack of "walkable" dining options, especially since so much of campus shuts down around dinner time, so having this awesome place right across the street is really a feather in our cap. A Shake Shack recently opened across from the University of Miami and hosted specialty menu items like "The U Malt," so I'm interested to see what they do for FAU!

In the meantime, here are some other franchises that should open near campus (in no particular order):

We're fortunate to have some good sandwich places in Boca: Laspada's, 620-SUBS and V&S Deli... so why do we need another sandwich shop? Well, the three best arguments for SandwichU are: 1) their commitment to going balls-out for the local university where the shop is located, 2) dedication to late night food and 3) their crazy menu. Here are two perfect examples:

Oh... and not only are they open late but they deliver to dorms too. Do I need to say more?

Can't have a SandwichU? CONSOLATION PRIZE: 100 Montaditos, which offers $1 sandwiches and $1 beers on Wednesdays. Talk about livin' on a college student budget!

Yes, it's a pizza place. And there a million pizza places all over south Florida and Boca Raton. Some people especially like Boca's Best Pizza Bar in downtown... haven't been there in awhile but from what I remember it was good. Cannoli Kitchen should be a local favorite, but nobody seems to be shouting their names from the hills either. California Pizza Kitchen is a personal favorite of mine but it's all the way at the boca mall (and it's fairly expensive). Mellow Mushroom, on the other hand, seems to be the best "fit" for a college town. It's got a hippie flair, with designs inspired by 60's and 70's era rock'n'roll, groovy colors and a rock soundtrack. Oh, and the food is awesome, obviously. Don't believe me? Try it yourself in downtown Delray. Then you'll understand why this place, already popular in college towns, should open in Boca Raton (preferably in University Commons next to the new Shake Shack).

Can't have a Mellow Mushroom? CONSOLATION PRIZE: Bleh. Well, in that case, maybe a Stevi B's Pizza Buffet... which is NOTHING like a Mellow Mushroom but hey, a pizza buffet could do well by FAU and it doesn't have the stigma of a Cici's. Also, it's a little bit better than Cici's... for what that's worth.

Thanks Wikipedia.A northeastern-U.S. convenience store with great food, especially sandwiches. It's hard to describe why this place captivates so many people but it just does. I've often heard people say they've chosen places to live and work based upon the proximity to a Wawa (and Trader Joe's, but that's another story). Since we have so many people in Boca Raton from the northeast, especially Jersey, Wawa is a natural fit for our city. And hey, it may not seem like such a longshot since Wawa recently opened seven stores in Orlando. "Florida is our future," said Howard Stoeckel, Wawa's CEO."

Can't have a Wawa? CONSOLATION PRIZE: No idea. The only other convenience store worth talking about is 7-11 and Boca citizens want nothing to do with that.


Howl At The Moon

Yes, it's a dueling piano bar, and yes, Boca already had one of those for a short time before it closed down. However, FunKey Nuts (the forementioned Boca piano bar) was in a terrible location over in a corner of downtown that wasn't even facing the main street (Federal Highway) and was surrounded by, what, art galleries, nail salons and other such nonsense? I don't think anything will be successful in that location. Howl At The Moon would have better success because it's a name brand with 13 locations across the U.S. in places like Boston, Chicago, Orlando and... Destin, Fl, so why not Boca? Dueling piano bars are great and this one just needs a good location (like across from FAU) and it'll take off. I know I keep referencing University Commons, and not everything can go in University Commons (like our next one, which wouldn't be a good fit) but if UC is going to have one entertainment/bar venue, it should be this one. And right along Glades Road... can't get better exposure than that.

With only two stores, it might be a stretch to call INSERT COINS a "franchise" but there are plans to expand it to other places. Basically this is a bar with various TV screens to play video games... as well as full arcade machines. It may seem a bit "dorky" to some but the atmosphere is great, it has a unique theme and it can draw out some of those students who might be turned off by the monotony of a regular bar. There would also be the opportunity to do "live Rock Band" here. Said one reviewer on Yelp: "I firmly believe that every town should have this bar in it.  Video games, drinks, loud music.  god yes."

There you have it.
GO OWLS!