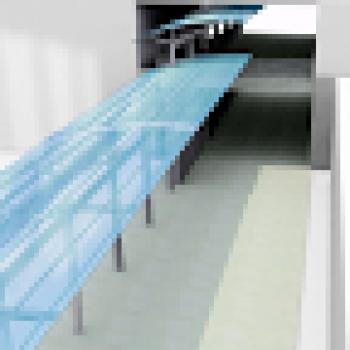 One of the fun things about this blog is imagining what FAU will be like in five, ten or maybe even twenty years from now. The school grows so much, adding two to three buildings a year, changing the landscape, moving offices, boosting the number of people, putting up banners, etc that students who attended even 10 years ago feel like they don't really recognize the campus anymore.

And for the most part, change has been good to FAU. I don't think anyone would really argue against the Breezeway Cafe renovation, the Innovation Village area (dorms and stadium) or the new Engineering building, in all of its LEED-certified glory. We're growing up and some things that served us well in the past need a facelift to deal with the increased demands of a burgeoning Owl Country.

Take the Breezeway. As the main "spine" of campus connecting the major buildings, from the bookstore to GS (formerly GCS) to Business East, it attracts a ton of foot traffic and takes a beating from both blazing sun AND driving rain. Even with a limited budget, FAU still managed to paint the ground and the columns, installed new lighting and added new mounted plastic frames for people to attach flyers to. Oh, and every once in awhile they fight to contain the leaks caused by the rain... which it does, all the time.

But let's be honest here: the Breezeway probably needs a bit more than paint and plugs.

As we mentioned yesterday, FAU is seeking $2.5M for "Breezeway Repairs." They've been seeking this money for a long time. The question is: what would YOU do with $2.5M to repair the Breezeway? Would you seal it up with glass on both sides and provide air conditioning and carpet, like an airport terminal? Because that's what one SGA President unsuccessfully pushed for a couple years back. That might have been interesting. But considering how much lateral connectivity there is with existing campus sidewalks, there would have been a ton of doors; kinda pointless to air condition a space when you have doors constantly opening and closing.

So maybe not that.

Maybe you'd take the money to extend the Breezeway toward Parking Garage 1 or the current Student Union? Because FAU flirted with those ideas too (and hopefully they'll never be realized because that would be ridiculous and ruin Diversity Way). In fact, years ago they did a study and here's what the south end of Breezeway might have looked like:

Photo from Perkins and Will Breezeway Study.
Same deal as the photo above.
Awkward city.

So okay, not all ideas are good ideas... and hopefully we haven't done this yet because someone had the stones at a BOT meeting to say, "Please God no" and not because "we're just waiting on the money to come in."

To be fair, part of the problem with updating the Breezeway is that it's an awkward structure to begin with. For instance, what's with the grating on the end? Was that considered a chic architectural flourish, the way all the stones/shells on buildings were? (I'm told that was a fancy thing back in the 70's)

Someone must really like the whole metal grating/frame look because another Breezeway study wanted to turn the whole thing into a Metal Gratefest.

It wasn't all bad though... I liked this idea of creating a social space around the middle part of the Breezeway, with a wavy overhead and tables. Why don't we have more crescent-shaped seats? It's a great idea.

You're looking at what would be the east side of the Breezeway, across from what is now the Hillel Center.
So what can be done with the Breezeway? It's a good question. And I have ideas, some of which may work or some of which... may not work.

Basically, I'd like to see the existing infrastructure removed and replaced, segment by segment, rather than trying to patch pieces and add onto them. It would give the Breezeway a new overall aesthetic, provide opportunities for more efficient wiring for electronic additions like LCD/sports ticker-type screens and fix the damn leaks.

I think we need to look at the bottom level as "bringing the Breezeway into the future" and the top level as green/recreational space.

Here's a neat concept for lighting (fourth picture down) that they use for a walkway to the Strathmore Music Center in North Bethesda, Maryland. The lights can actually change color by section... or just be normal lights. I'm not saying we have to go balls-out "Vegas" here but there is room to explore this in a tasteful and unique way for the ceiling of the Breezeway's bottom floor.

The sections of the Breezeway on the west side that now have rock walls, you know, the ones by the disgusting bathrooms and the Student Affairs bulletin board, could be updated with a regular wall and the bulletin board could be replaced by a large wall screen switching between video of rolling tide at the beach with current weather conditions and student organizations/school announcements. There would be plenty of seating and electrical jacks at every other pillar so people can sit down and plug in their phone/laptops to do work outside.

One thing to consider is that, really, FAU doesn't have a lot of land on which it can build. Eventually most of the "gray" space (open pavement) will be gone and most of the open green space (like the quad across from the Hillel Center) may need to host a building. Or maybe they'll always keep that space open out of principle. Regardless, the top of the Breezeway gives us an interesting opportunity to explore green space and recreational space pretty much exactly like this (seriously, check it out)

And this for chairs.

Tell me that's not an awesome idea for the top of the Breezeway. Nothing else even makes sense to me after seeing this. Hopefully you feel the same.