College of Business Renovations plus updates on PG3/Breezeway

Swung by campus the other night to see what was happening (the place is dead because all the students have gone home for the holidays) and noticed the long-awaited Sean Stein Pavilion has finally been completed.

The statue honors a former FAU business student who unfortunately passed away in 1999. The statue sits on the south side of the Business Complex on an elevated platform surrounded by trees. You can read more about the Sean Stein Pavilion here. 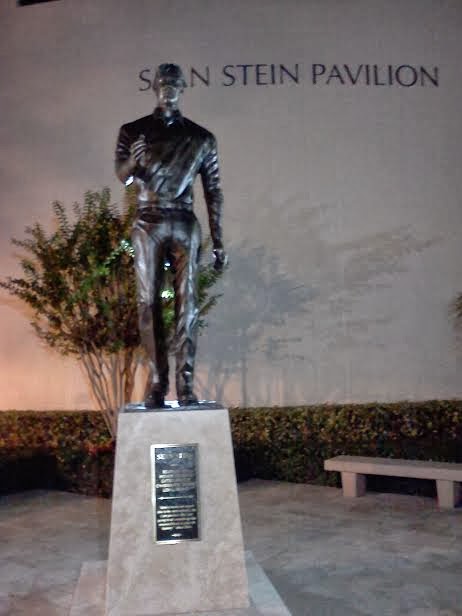 But that's not all: the inside of Business West has changed as well. Notice they removed the nice plantings inside that gave the Business building an "indoor park" feeling; now it's just a regular atrium. The Outtakes has also been moved from outside the main lecture hall to the end here... you can see it on the right edge of this picture (it wasn't worth it to take an extra picture just for the Outtakes) 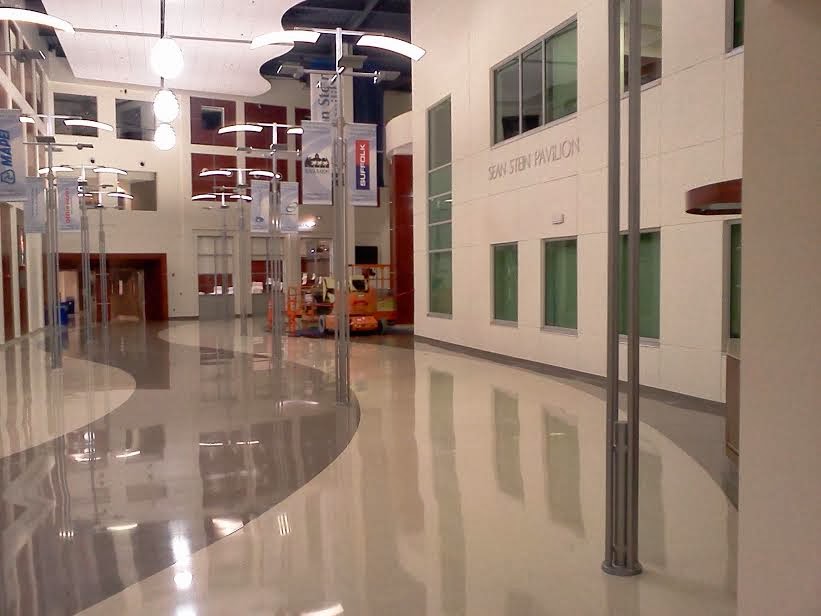 Speaking of the Office Depot Grand lecture hall (the aforementioned main lecture hall), a nine panel flatscreen television has been mounted to the wall... very nice. 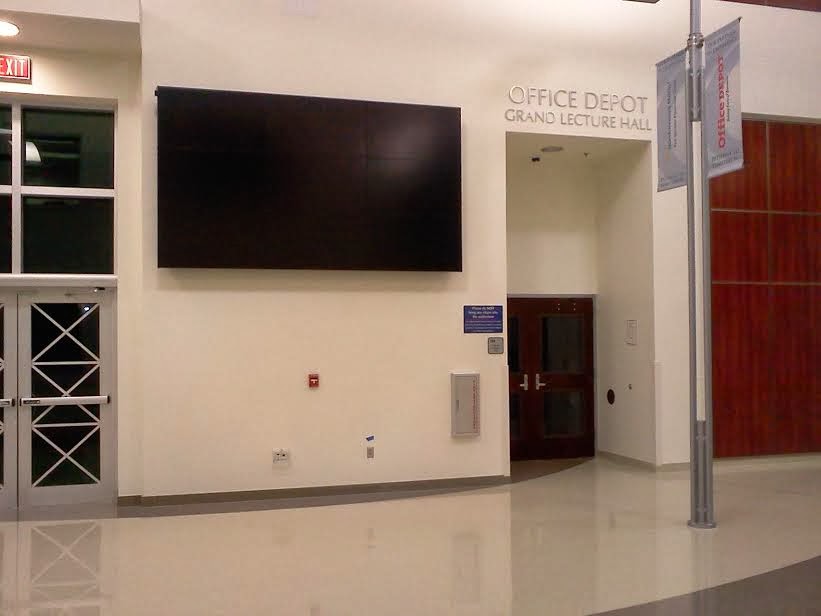 There's actually two of them, the other one being right around the corner by the Trading Room.

Although I'm not a fan of removing the garden, this was an inspired move: opening up the space between the atrium and the DeSantis Center here. 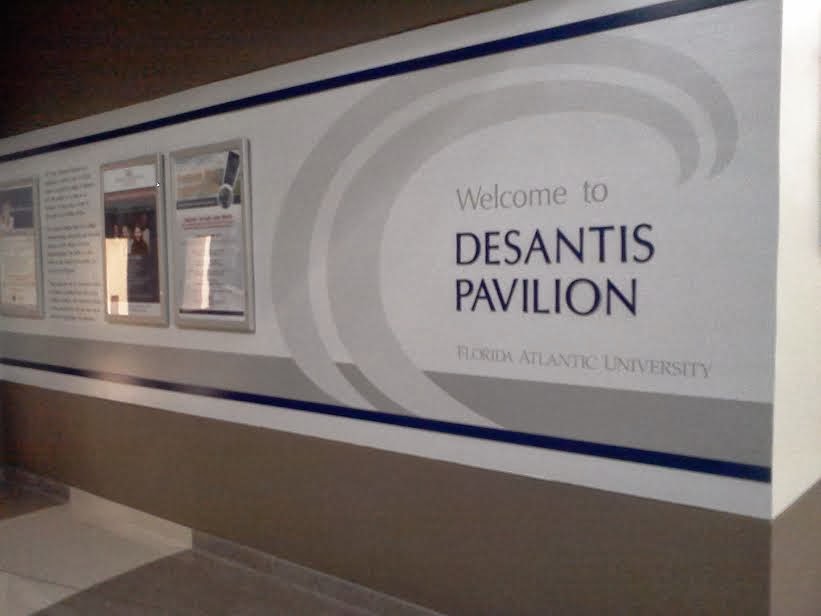 Before you had to go outside and enter from a separate entrance to the north. Now it's combined. 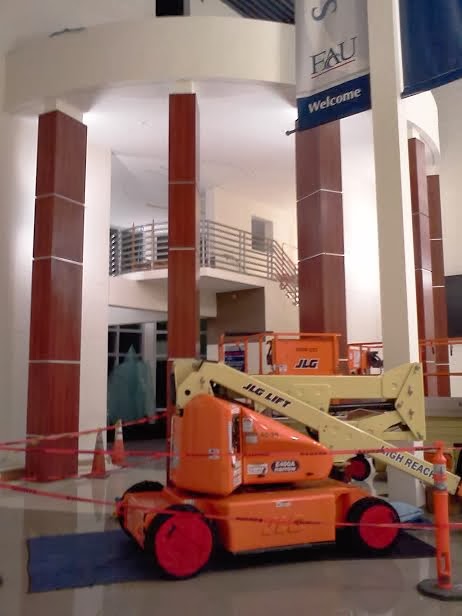 That staircase used to lead you past movie posters and upstairs into the Center for Motion Picture Business - past the offices they even had a legitimate Muvico-brand movie theater (just one) for 47 people that was used for classes.

According to FAU, "The Carl DeSantis Business and Economics Center for the Study and Development of the Motion Picture and Entertainment Industry was established in 1997 at Florida Atlantic University's College of Business. Its mission is to focus on the business and economics of the film industry by serving as an incubator for ideas, a forum for discussion, and a center for scholarly activity in the field."

It was one of those "hidden surprises" about FAU and when I approached Program Board several years ago about showing movies in there as opposed to, say, the Grand Palm Room, both sides got excited about the possibility... but I never saw any flyers about showing a movie there so I'm not sure if they ever went through with it. And now they can show movies in the Barry Kaye Auditorium so they don't need this space (not to mention that Muvico is now Cinemark...)

Parking Garage 3 is nearly finished. The fences are down and they're just adding the last bit of paint and sod. I took a few pictures but, it being night, they didn't come out well. I'll swing by there again during the day and get better pictures for you when it's finally done. For what it's worth, the sidewalk out front of the parking garage is about 45 feet away so once retail moves in there is plenty of room for outdoor dining tables. Again, it could be very nice.

It's a shame they're planning to ruin the Innovation Village plan with the COM building. Assessed the space again when I was there and... I still can't believe they're doing that. I hope they come to their senses and build it in one of the COM parking lots instead before it's too late.

Also, when the last blog entry was posted to the Owl's Nest Facebook page, several people commented about how the Breezeway needs a little TLC. Absolutely agree and it's getting a multimillion dollar facelift very soon here. This blog originally touched on it back in October 2012 here.

Here's the update on that: FAU has a shortlist meeting on 1/23/14 to choose A&E (Architects and Engineering) services for a $2.5M Renovation project. Basically they're looking to fix the leaks, update the lighting, dress it up and provide more study/socializing space. I have not seen a specific timetable for the construction yet although I predict it will happen within the next two years as the design is finalized, construction begins, etc. I imagine they would do their best to work around crowds and may have to shut down the Breezeway in small sections as they update it. If I come across any renderings I'll pass them along to you.

That's it for now. As always,

ABOUT THE DIEHARD BLOG: Development news and ideas for FAU and Boca Raton including campus updates and photos! NOTE: I am not a journalist. I do not work for FAU. The opinions expressed herein are not the opinions of Florida Atlantic University or their affiliates. They are merely public opinion. All attempts will be made to give credit to original copyright holders where applicable.