After registering 16 tackles, forcing a fumble and l…

Taggart believes that football will be played on Sat…

Jackson State is an FCS school so Im not concerned.… 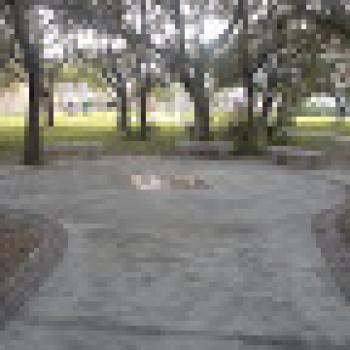 Did you know... Heritage Park has a "Reflection Garden?" It's technically a monument to faculty and staff (nice touch) but also creates a peaceful space for students to relax...                     (all pictures mine)

I've never seen anyone relax here but theoretically it's possible :D I like Heritage Park and I wish it could be expanded - maybe the new shade trees by IRT are part of that.

Did you know... the Engineering building (the old one) has a hallway with various student projects hanging from the ceiling? It's pretty cool and I wish we showed off student work more often (hence the Student Innovation Gallery post). on the end there in red is the human-powered submarine (or an early model anyway). I believe it's called the Talon-1 and you have to crawl in there to propel it yourself. They won awards with that submarine a few years back. Read more about that sub (and the club that built it) here.

Wonder what will become of them when Engineering finally moves out of the building and into the new building.

Did you know... the Owl sculpture outside the Alumni Office is actually the wiring for a topiary, meaning a bush shaped like something (remember Edward Scissorhands?). Here's how the topiary looked during Homecoming Week... slowly but surely crawling up the frame. You might have noticed that plants are growing up some of the stadium framework (as intended) too.


You probably knew that the bookstore is actually owned by Barnes & Nobles, which means they make the decision as to how it looks, but did you know they're considering moving to Innovation Village? A couple years ago, a manager told me they were considering moving there and this space could become a bookstore for trade books (e.g. normal books). That might be interesting.
Anyway, at least they did a good interior renovation and worked in the FAU colors everywhere.


Going to end with a shot of the new Night Owls wrapping on the carts because, quite frankly, not sure where else to put it. But I must commend Student Government for injecting so much FAU spirit into everything and hope they continue to do so.

As a side note, a friend of mine worked for Night Owls a few years back and I got to do a "ride along" with her to keep her company. The things that students want you to do for them are pretty ridiculous. Some people want to be picked up from HPT to get a ride to the cafe. I don't mean frail, good looking women in the dark... I mean tall, muscular dudes. one guy wanted us to drive him from IRT to the gas station across Glades so he could get Subway (for those who didn't know, that weird sub shop there used to be an official Subway). And we took a handful of people home that kept asking us to stop so they could "holla at this girl."

To the current students: if you know somebody working for Night Owls, see if you can ride with them one night because it's pretty funny. To the alumni: sorry you missed out. But now you know what goes on there.