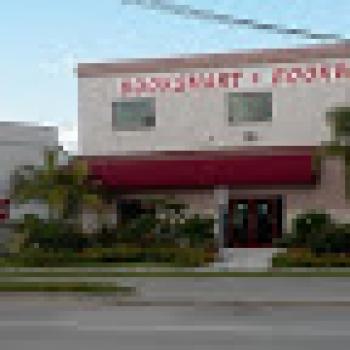 Right now 20th Street is a dead zone desperately trying to maintain its status as Boca's "center" for industry. Fabric stores, bike shops, storerooms and warehouses intermingle with empty buildings and empty plazas. It's been difficult to attract entrepreneurs to the space.

However, as FAU grows in size, there has been a shift towards promoting more college-centric business in the area. For instance, the "official off-campus bookstore", Booksmart, has moved from their Glades location across campus to new digs on 20th Street. The owners see it as a win-win situation, noting that they save more money on the monthly lease payment here and should get more foot traffic since a new student housing project (University Park) will be opening at 20th Street and Dixie. Furthermore, "everyone knows 20th Street because it's the main route to Publix." They're right: the majority of FAU students get their groceries from the Publix in the 5th Avenue Shops and 20th Street gets you there, so any interesting development along 20th Street should get their attention.

Here's a shot of their new building (all pictures mine):


And the inside should be pretty familiar. The long rectangular space is only half-filled right now until the lease comes up on their used bookstore, Bookwise, on Spanish River Blvd. At that point the used bookstore will take up the other half of the store, doubling the "use" of the space since most of Booksmart's business comes in the first month of the new semester and everything slows down from there. Bringing in Bookwise is a great move.


For what it's worth, their stock is exclusively FAU stuff - no Lynn or PBSC spirit apparel that I could find. And though they have the usual FAU shirt designs, these were new to me:


Across the street there's an old plaza that's been held up primarily by traffic to the Nakava Bar, arguably one of Boca's "student bars." However, there haven't been many other vendors in the space - I think it's been home to a small convenience store, dry cleaners, that sort of thing. But recently more and more stores have opened up in there, from an FAU grad's Go Greek apparel store...

...to Rita's Pitas, a corner restaurant giving FAU student discounts, to the Hook Up and University Chill.


Although you can argue that these kind of developments appeal to all ages, I think names like "University Chill" send a pretty clear message about what sort of people they are trying to attract. And this is fantastic, if you think about it, because people really get the sense of being in a "college town" when they're driving around and seeing names like "University Park", "University Chill" and even a Red and Blue Owl in the logo of your new bar, The Night Owl (previously "T.J. Murphy's Bar & Grill" and currently under construction)

EDIT 3/23/13: University Chill lasted less than 3 months before shuttering and is now a vacant space. Night Owl is now open and considered by many undergrads as the top college bar in Boca Raton.


The Night Owl will be located over by Cannoli Kitchen on the northwestern side of the intersection at 20th Street and Federal Highway.

So this is a nice start and hopefully students know about these businesses and patronize them frequently enough to keep them open and promote this kind of growth in the area. The City certainly wants it, as they're in the process of renaming 20th Street to "University Boulevard" by establishing a new "overlay district." Basically what that means is that the area would be rezoned to encourage FAU-centric growth along 20th Street from campus all the way east to Dixie Highway. And maybe even more. "If it's successful," a Boca Raton staff member noted, "we could extend it all the way to Federal Highway."

Right now the city is waiting on a Treasure Coast-based development group to give them an analysis of the area and what it could possibly look like. I think the idea would basically either be a strip of storefronts, like the ones referenced in the above pictures, or preferably do "mixed-use" developments with stores on the bottom and student housing above it. After all, people are more likely to patronize businesses where they live and that brings more students close enough to campus to catch a shuttle or ride a bike, thus reducing traffic around campus and freeing up parking spots for people who do have to drive to campus.

Here's an example rendering in case you're a little fuzzy on the idea of mixed-use development.

I think it's pretty clear why this would be a good thing for FAU and I'm ecstatic to see the City pushing this forward. Understand that once 20th Street becomes University Boulevard we'd still need developers to step up to the plate, buy into the vision and get the ball rolling. This could take a while. It could very well take 5-10 years. And depending on how the development goes, it may require the current businesses above to relocate to these new retail spaces.

So what would we want there? Well, at least four or five more student bars - electronic bars, country bars, sports bars, piano bars, indie bars, nothing upscale (because they don't last) - would be high on the list to create a nightlife area for students.

And hey, maybe relocate local faves like Hotdogopolis, Funky Buddah and 620Subs over here (or open a second location)

This could be a really great place if they do it right. Let's hope they do! Have a great weekend.