If You Build It and Neglect It, They Won't Come 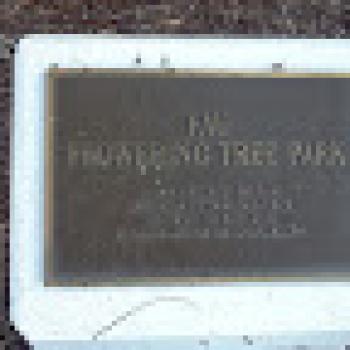 Not to be too hipster here but you've probably never heard of it. I've talked to a number of people about it trying to figure out what happened and nobody seems to know what I'm even talking about.

So I took some pictures for you guys. The Flowering Tree Park is on the very southeast portion of campus at the end of El Rio Trail. You can reach it from the University Village Apartments by heading south on the old paved path running through the "owl fields."

...which you can see on the left. This is the formal entrance. You can see that nobody's been here for awhile.
Probably the only good path left there as overgrowth has reabsorbed everything. The park had all the makings for a great place, with defined edges and sign posts, but that has fallen to the wayside. Most of the paths don't look like this anymore. They're congested with fallen branches, spiderwebs, weeds and more. Had I not discovered this place years ago and saw what it used to look like, I wouldn't even be sure there WERE paths.

The original intention would be to separate the park as gardens by seasons so you'd understand why some were blooming at a particular time and others were not.
They were working on an irrigation system. Not sure if it still works.
Some flowers have managed to survive in this wilderness!
Around one side of the park is an FAU signature banyan tree that's sort of grown around itself and created a cavernous interior. It's kind of cool. on the other side of this tree is a rest area for El Rio Trail bikers/joggers with a picnic table.
It's not even represented on the El Rio Trail sign that's right next to it.
I've sent an email off to SEEDS, the student organization building the Tortuga Trail, to see what they know about it and if there's anything they can do to give it a new life again. A little mulch, a few signs, some benches... it could be a very nice place, a little slice of Eden right there on the corner of campus.

For what it's worth, most universities have gardens/nature trails/parks on their campuses. It gives students a place to unwind and get some zen.

A number of campuses also have full-fledged arboretums, or a collection of trees which sometimes represents every kind of tree in that state. I'm not saying we have to go that far, especially since we probably don't have enough land for something like that, but I do think it's worth expanding the green space - and this Flowering Tree Park - on campus. For instance:


The area above marked "Potential Park Space" toggles between being owl preserve (possible) and future dorm space (most likely) on Campus Master Plans; the latter fits in with the idea of preserving a campus "core" (with academic buildings) encircled by support buildings like student housing around it. Still, if you want to develop that land and disregard the one or two owl nests over there (that I saw... there may be more), then you could still potentially extend Indian River Street east to create a north and south division of that potential park space. The north side could have another IVA-esque tall dorm building. The south aspect of it could be the new, expanded Tree Park with things like koi ponds, orange trees, all the different kinds of palm trees, oak trees and ferns from Florida. That would truly be a great place. And I'm sure President Saunders, who earned a Ph.D. in Botany from the University of Massachusetts-Amherst, would dig it too.

Years ago I wrote to President Brogan and told him about the impasse between the Boca Raton Botanical Society and City officials. The Botanical Society wanted to develop "an $8.3 million botanical garden in Countess de Hoernle Park in the next five years. It will consist of an 80-foot high dome for a conservatory, an amphitheater, a play garden for children and an area for research" but the City wanted the Botanical Society to have way more money up front than they had and also wanted them to construct the sidewalks and such to the dome, which eventually caused the entire deal to break down. I suggested to Brogan that FAU approach the Botanical Society about building the dome on campus instead over by the tree park, noting that it would not only give the university a distinct landmark structure but also a plethora of educational and research opportunities, as students gave tours and worked on various projects with FAU professors inside the dome. He passed it on to the university planners, who must have said "thanks but no thanks" since, well, we still don't have the dome.

I still stand behind that idea and I think the park is a great idea. During undergrad I tried to help by cleaning up and planting some things there. Maybe this post will raise some awareness of it now because it really has a lot of potential... and nobody seems to know about it!

Have a good weekend!