Conference USA will be sending an additional seven teams to Bo…

Thought I'd do something special and talk about my vision for an FAU Athletics Master Plan over the next 50 years. I'll show you the image first (done in Paint because I have zero Photoshop skills) and then explain in detail about each object.

This is NOT an official FAU plan (I have not seen or heard specifics about a Master Plan for Athletics, if it exists). This is just a matter of looking at the space and saying, "Eventually we're going to need x,y and z, so where could it go in the current area we've allotted for Athletics facilities?"

I should also mention that this plan operates on the assumption that the eventual new basketball arena will NOT be built over by the football stadium because of the new COM building and everything I talked about in the "Strange Decision" entry.

So without further ado, here's my idea: 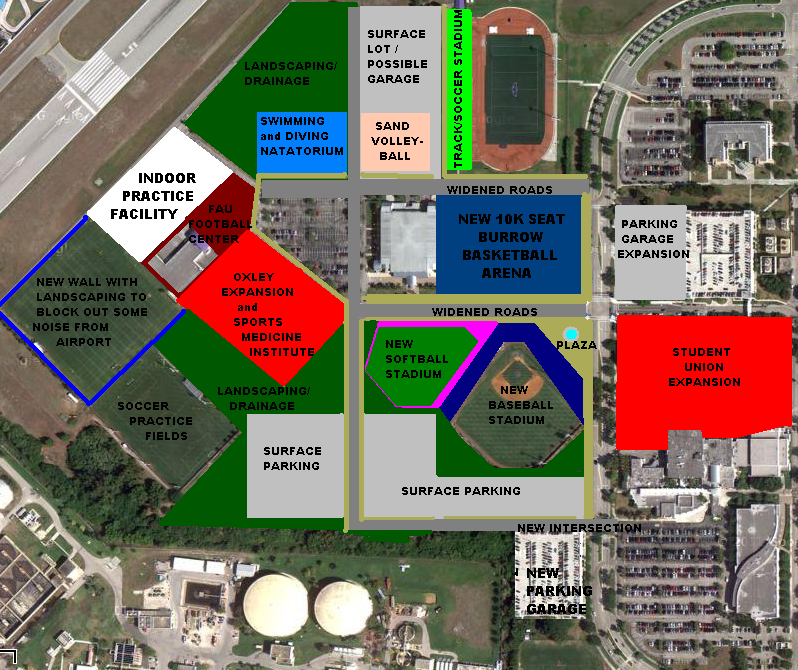 Now let's talk about this piece-by-piece. We'll start with the non-Athletics components first.

A new intersection would be added west of the current Student Union parking lot that would lead into a new parking garage. During the day this would obviously allow more parking space for commuters but then at night it would work for Student Union events and, of course, sporting events.

Every time we talk football or basketball, people complain about baseball... so let's talk baseball first. This plan brings both baseball and basketball "up front" along West University Drive to advertise those sports instead of tucking them away from traffic. The idea is that you could conceivably park in PG1 as an alumnus or walk over from the Student Union as a student and there'd be a nice paved plaza there around the intersection of West University and Volusia serving as a "gateway" to athletics.

I've combined the baseball and the softball stadiums into one complex because that way they can share a common atrium with food vendors/apparel store/bathrooms/etc. It also brings softball more into the limelight because it's tucked away and forgotten where it is now. In fact, what I've tried to do is create a "ring" of athletics facilities around the basketball arena... see that?

In my mind the ultimate FAU baseball stadium would have a tinted blue glass façade that resembled a large blue wave (to pay homage to the team's earlier name, obviously). Inside would be the atrium I mentioned plus a small recruiting waiting area/museum/hall-of-fame area with trophies, pictures, jerseys and video loops from important moments. Coach Mac's offices would be in here, as would an upscale "country club" locker room, batting cages and meeting rooms. Outside there would be a canopied grandstand with 5k seats along the lines of Davenport Field at the University of Virginia.

The baseball practice field - which I'm told they use "basically every day" by one of the players - would have to be moved somewhere else. Technically it could go in place of the soccer practice fields but when people start showing up for games you're going to want that as parking instead, and Athletics can always construct another practice field somewhere else on campus for them to use - football practices in one area of campus and plays in another, so it shouldn't be a big deal for baseball to do it.

Moving on… the basketball arena has migrated here from Innovation Village which creates the opportunity to incorporate the existing Burrow into the new facility as a practice space. In fact, that would mean that two of the three sports that practice in the Burrow could do work concurrently. Furthermore, by incorporating the old facility we can keep the treasured name of the Burrow for the overall complex.

Moving north, I envision us building seating for 2k people along the track'n'field and erecting a video scoreboard on the east side. Locker rooms, food vendors, ticketing and restrooms could be built below those seats. This would allow us the opportunity to have our FAU soccer and track meets at this beautiful facility as well as host high school and college competitions there.

Next door would be a small sand volleyball stadium and next to that, the new swimming and diving natatorium. The Ropes Course Pavilion (as well as the rundown tennis and basketball courts) would be moved to a more sensible location southeast of IRT. 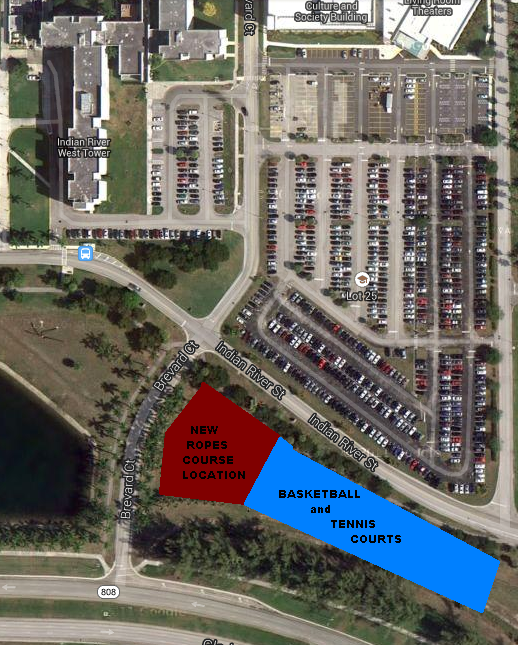 Actually, that's the cheapest part of my plan. It just makes sense to move the ropes/tennis/basketball to a place where people A) know it exists and B) get excited about using it because they drive or walk by and see other people using it.

My projection is that eventually, if FAU can afford it, they'd want to do the same thing that every big time program is doing: indoor practice facility and a dedicated football center separate from the mainstream athletics center. This layout expands the old Oxley and makes that building 100% football. Some people scoff at the indoor practice facility idea but the reality is that practicing in rain hasn't made us immune to rain - we play just as poorly as anyone else when the ball is wet - and there are way too many practices, sometimes every day, delayed because of the south Florida weather. That's lost time. Football, like other sports, is on a strict schedule, sometimes from waking up to going to bed at night, scheduled hour to hour. They don't have time to stand around and wait for the rain to let up. And finally, having an indoor practice facility helps us in recruiting because most other people have one as well. You don't want to be the "odd man out" in recruiting.

The indoor practice facility is a good fit for that space because players can run right inside it when the rain picks up. You can also access the Football facility straight from there; some places have doors that open right up from the football center to the indoor practice field, and we should consider that as well.

So the football facility would have all the bells and whistles (fancy locker room, hydrotherapy pools, dining tables, meeting rooms, etc) plus have direct connectivity on both sides to the indoor facility and the expanded Oxley Center.

The expanded Oxley Center would have Administration offices, academic center, 35k sq ft general weight room ("one of the largest in the nation"), media room and more. There would also be an awe-inspiring lobby space telling the "FAU sports story", as is common now at places like Ohio State where Chun came from. The new Oxley Center would also include (as a Phase 2, 3, whatever) a dedicated Sports Medicine Institute to provide medical care, strength and conditioning, and academic space for the Exercise Science majors who are currently using both the Burrow and the old FAU gym by the pool.

Annnnd there it is. I've tried to give consideration for optimal use of surface parking, and I know right now outside of the garages it seems like you have to park behind the stadiums and then walk there, but it's not going to be perfect and, again, I made the executive decision to "bunch up" the stadiums by West University to act as multimillion dollar billboards for those sports. When you drive by and those places are rocking, you'll know about it and it'll all make sense.

Hope you enjoyed it! Let us know what you think on either the Owl's Nest forums or the Facebook group about these ideas. If your first thought is, "That's all well and good to think about but you need money to make it happen." I hear you. Obviously this full buildout would take north of $200-300M and we're still trying to get a couple million for an academic center in the current Oxley so the timeline is… distant… but that's why I said, eventually, 50 years from now, this could be what FAU Athletics looks like… and it's fun to speculate.

Oh, and I also envision us eventually adding a lacrosse team because we could (I think) offer lacrosse games in the stadium when the football team isn't in there and create a stable of players that could eventually go on to play professional lacrosse… in our stadium. Nice if things could work out that way, huh?