I would think President Kelly would lobby real hard…

In theory, if teams get pulled out of the AAC, the c…

Yea I mean if we rattle off a few undefeated seasons…

Football and baseball help.and some of the Olympic… 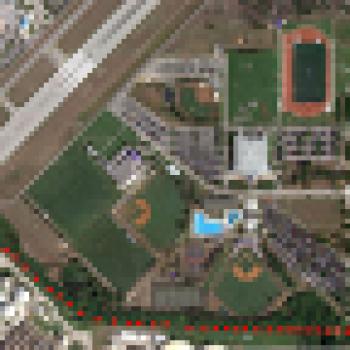 Airport Road has the advantage of being parallel to I-95, making it a highly attractive space to developers who know their signage could be seen by a tens of thousands of drivers every single day.

The airport itself actually owns all the vacant land along its space, a fact I learned when the airport sought proposals for the vacant land that eventually became the gaudy City Furniture (wish it would have been an IKEA). Incidentally, the runner-up for that piece of property, iPic, still settled in Boca Raton at Mizner Park and is doing very well there, albeit as a a movie theater rather than as the full entertainment complex that would have included movies and a bowling alley.

All's well that ends well, eh? one of the reasons why City Furniture was chosen was because it claimed to have peak traffic during the day versus Cinemark, which had peak traffic at night. Representatives for the City of Boca Raton were concerned that having iPic there would generate too much traffic, a problem they were already contending with along Glades Road.

Obviously I'm not a traffic engineer but I think they were playing it conservative. I agree with one of the proposal committee members who argued for iPic because "Airport Road is for entertainment", citing Boomers and Cinemark. I'm going to jump on that train and talk about a couple of things I'd like to see there.

Bicycle path in New Jersey courtesy of Wikipedia.
The yellow polygon on the map represents the "overflow" parking lot at Boomers that is never used because there is never overflow parking at Boomers. This creates, at least in my mind, a potential space for an entertainment venue or a restaurant there (while still preserving some of the parking lot to service that attraction). It may not seem like a lot of space but take a look again at the size of the Boomers building in relation to the parking lot in question and you'll see it's actually a decent amount of space.

So what should go there? Several thoughts come to mind...

Thanks Wikipedia.
or what about a large scale stage illusions (Magic Show) Dinner Theater? You pay $40-50/person for a great dinner and illusions for an hour. That would make a great compliment to Cinemark. It would just have weekend shows and could also double as a "magic school" during the day, something that may already be drumming up interest in Boca Raton now.

Or maybe even one of those fancy, hip new bowling alleys like Strike (see picture) in Sydney or Splitsville... everywhere.

After all, Boca Raton prides itself on being a little bit better than other places. It has an award-winning upscale mall in Town Centre. It has million dollar homes and $100+/plate restaurants. It even has an upscale cemetery, for crying out loud.

So why not great entertainment? I'm not saying you have to pay $20/game to go bowling, as the game prices are still reasonable even if the bowling alley is better than anything you've ever seen. I'm just saying that Boca has the ability to attract the best things because of the college students (with expendable income), the wealthy retirees (with expendable income) in a city known to spend money (hence the number of fancy stores all over Boca Raton). We're lucky in this way and Boca could play it up. Not saying Boca has to become Orlando. We're just talking about a couple of attractions here

For what it's worth the City is seeking out RFPs (request for proposals) for entertainment/restaurant space on Spanish River Blvd next to the new library. Any of these ideas could also work over there and really the only disadvantage is that it's a little further away from campus. Not much, at all, but far enough away where a bike trail couldn't take you there. Can't wait to see what those RFPs turn up; the original ideas included an ice skating rink and a Dave & Busters, though those plans were put on hold for a number of reasons including an uncertain economy.
Any attraction within 3-5 minutes drive of FAU is still a win in my book.
GO OWLS!