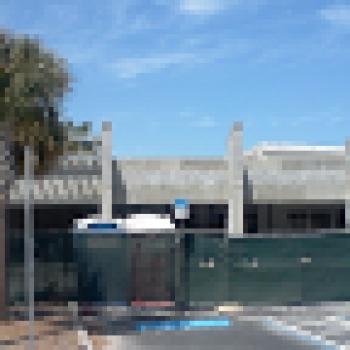 If you've been on campus lately, you might have noticed some construction going on over at the Student Union. This is not the formal expansion project we've previously discussed but rather an expansion to the Centre Marketplace buffet area, colloquially known on campus as "the Caf."

So what are they doing? Well, as FAU grows, so too must the dining areas for feeding them. With the new, yet-unnamed Residence Hall opening in Fall 2013, our total residential student population will be topping out around 4,100 people, so Chartwells needed to expand the Caf by 500 seats.

According to FAU documents, the project will double the capacity of the Caf at a cost of $5.6M. That's a figure that may sting a little bit considering how close it is to the $6M that GEO Group was going to give us, but apparently this is a contractual thing requiring Chartwells Food Services to make capital investments in the university infrastructure. So it's not like FAU is using $5.6M that it had stashed away somewhere that could have gone to the stadium. Let's be clear on that.

EDIT: I previously stated that the expansion would cost $2M, which seems like a more reasonable estimate to just add more floor space, so I'm wondering what the additional cost could be - maybe new food kiosks? I'll ask around. At one point there was a rumor going around that Chartwells was considering a dedicated kitchen area that you could order a dinner from and then pick it up; perhaps that's back on the table? I have absolutely no sources to back that up at this time, though, so take it with a grain of salt.

I snapped some pictures for you guys on a recent visit. Here's how the Expansion looks now:

If you remember the giant egg/football/whale statue that used to be coming out of the ground, this completely replaced that - it's going to extend pretty much all the way to the road (West University Drive).

And here's how it will look:


Not too shabby! Especially digging the multicolored planes of glass. The rendering also suggests that the road in front of it will be redone with pavers, but I honestly doubt that's going to happen because, quite frankly, paving just the portion of road outside of the Caf will look silly and repaving a larger portion of West University to match it would be pretty costly.

That said, I do think both Glades entrances should be redone with pavers to give them a more grandiose presentation but seeing as they just repaved the western (main) entrance with regular asphalt, I doubt they're going to be installing pavers any time soon. Maybe it's for the best because what you'd really want to do there is pavers, extensive landscaping around the signs and redo the median to have a water feature like a row of fountains.

In the meantime, we can continue to do other small projects like this recent $50,000 renovation of the All-Night Study Area on the east side of the library. According to the new SG website, the renovation provided for "better seating, charging stations, and study areas." Take a look:


As you can see, one thing SG has been really good about is integrating the school colors into more things. I'm not sure how much of this was red and blue before (pretty sure the stairwell was already blue, or maybe more of a green color before?) but the second floor definitely has more blue and red. Also, I believe this seating area is new:


I used the All-Night Study Area quite a bit in undergrad - in fact, my study group was once kicked out because it "wasn't open yet." once it opened, it was an awesome place because every university needs to have a 24/7 study spot. The fact is tests occur on all days of the week and there are times when students need to review Powerpoints on campus at 2 am on a Tuesday for their test at 9 am on Wednesday morning, so there needs to be a place for them. That's just college (and grad school, and professional school, but you get my point). So the original construction of this facility was pivotal especially since they had removed the original 24-hour Study Center that became Einstein's Bagels (for those of you who are new to FAU, that's what used to be in that space).

But even that's not enough space, as anecdotal reports are streaming through on Twitter about people having to sit on the floor in the library because there isn't enough space. Student Government responded by requesting that Administration consider building a dedicated Study Building, which on most college campuses is called "a new library." Hey, you never know. FAU does have an interest in building a "Science and Technology Library."

Student Government has been up to a couple other things as well. Three Historic Plaques have gone up on campus dedicated to the football team (seen below), the university's dedication by Lyndon B. Johnson (by the library) and President Barack Obama speaking at the Burrow (outside the Burrow). There may be more but these are the ones that I know about right now.


In other news, there's been no movement (as far as I can tell) on the following projects:

P.S. Don't let the recent controversies at FAU shake your faith. This is still a great school with great people and a great atmosphere. It's still making tremendous strides forward. Be proud of your heritage.