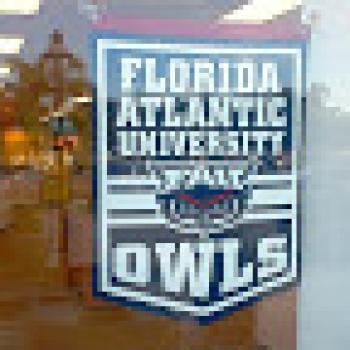 Mayor Susan Whelchel has referred to Boca Raton a "university town" on a couple occasions and it's certainly no secret that we here at the FAU DIEHARD blog certainly want the city to develop that way. A big part of accomplishing that - besides growing the university and increasing student housing near campus - is creating a palpable off-campus presence that constantly reminds people that they're "in the FAU area" (aka "Owl Country")

Back in 2009, I collected a number of Owl head cutouts and purchased felt pennants to hand out to local businesses. I made some headway here and there but overall Boca businesses were more hesitant about hanging up FAU stuff than I had predicted. See, I had been operating on the idea that businesses were interested in supporting FAU (and the college town idea), they just hadn't/didn't want to spend the money (an FAU flag, for instance, costs $50).

Fast forward a couple years to late 2011/early 2012 when Student Government picked up the baton and ran with it for their Owl Country campaign. Needless to say, they did an awesome job and were much more successful than me. Here's the result of their efforts as well as other progress made on integrating FAU/Owl spirit into the community (the following pictures are all mine):

You'll find these banners up at 16 Handles froyo shop and this Sprint (?) cell phone store in University Commons. It's also hanging up right over the register at Shane's Rib Shack (next to Moe's) and in a corner of Starbucks on Glades.Speaking of Shane's Rib Shack, look what else they have up in their dining area...
The "mural" at Laspadas and in a prime location: right next to the drink machine. To the left of this, by the register, is two UM pennants though (bleh)
Here's an unexpected find at the Corner Bakery Cafe, a Panera Bread-esque place with paninis, soups and salads over by Five Guys.
Hey, a University Press bin by the Hooters! If that's not the only big off-campus, it's certainly one of the few of them that are. Inside the restaurant, for those who haven't been there, they have FAU pennants, an Owl Head logo table and a multi-arrow sign showing FAU to the east only 2.6 miles (or whatever it is) away. Great touches, especially since the owner is a UCF alum.
Moe's continues their split FAU/Lynn love. Moe's in other college towns goes a little further than ours does, with things like a line banner of mini pennants around the central burrito building station. Not even sure if we make something like that, to be very honest...
The University Commons Barnes & Noble has decreased their support, in a way. Here their stock of FAU shirts are tossed in a corner like a pile of garbage. I doubt you'd know it was here unless you asked. A cashier told me they do sell, just not as much as the campus bookstore. Considering they have two shops and a mobile vending trailer selling FAU stuff on-campus, I guess that might be enough to satisfy a fanbase at our level.
Upstairs in Barnes the former dedicated "FAU Study Area" has been reduced to an area for children's games, leaving at least one person to study on the floor. In fairness to B&N, they may have needed the space and the study tables WERE attracting more Boca citizens than students who just wanted to sit down and read books all day instead of buying them...
Of course this isn't the only representation we have in Boca Raton. 620-SUBS has been basically FAU-themed for a long time now, and we've rewarded them with our business. Publix on Federal Highway will often put up football posters near the entrance and sell FAU shirts/hats (of questionable quality). The Boca Diner on Federal also flies an FAU flag and puts up football posters in their waiting area (thanks to one of their employees being a dedicated FAU football fan). McDonald's on Yamato Road has FAU stuff up as well. And of course there's the entire FAU-themed gas station on 20th Street, the (Valero) Owl's Nest.

And I'm sure there are plenty more that I'm overlooking.

Point is: it's a good start. It's especially a good start because these businesses don't have to do this for us. Not even at University Commons! And Publix obviously doesn't need to put up FAU paraphernalia to attract throngs of customers. Nor does Starbucks.

I was surprised that Pita Pit (next to Starbucks on Glades) didn't have any since that's a business that usually caters to college students. I'd also like to see something up at Panera and Pei Wei, but again, that might be a harder sell, as might be stores in the Boca Mall or Mizner (like the Boston Market across from Mizner)

There's sometimes a feeling that Boca businesses should support the Owls because we're the "hometown team" (I'm sure Lynn says the same thing) but when you get down to it, I bet a large percentage of these owners/managers have no affiliation to FAU other than location. They might have gone to schools like Florida or Miami and, if they were going to hang up anything, it would be Gator or Hurricane stuff. So we're lucky to have made this much progress, and once our football and basketball teams really start to shine, you'll see more banners and more FAU gear on sale again. Things may ebb and flow in this town but as mentioned before, interest from one business can spur interest in another, and slowly but surely Owl spirit can flood the community. Hopefully SGA's Owl Country campaign can continue for the next few years to expand our reach into Boca Raton.

I still believe it is critical to add FAU spirit to University Commons, as it is one of the largest "attractions" in Boca Raton and located along a road that regularly attracts ~80,000 cars a day. I think it's important for us to extend our FAU banners on Glades to University Commons on each lightpost in the parking lot.  I also believe we should heavily consider a repaint of the University Commons sign at the intersection of Glades and Airport Road to something like this:

Work in progress. There are a lot of different variations that could accomplish this same goal.
You know, work in the school colors.

Remind them of the red and blue.

Remind people that this is Florida Atlantic University Commons.

Remind them that this is Owl Country.