UPDATE 4/15/14: "Held Kick-off meeting Feb. 26th. Site was changed to west of Bldg 71 College of Medicine. Architect to provide first concepts for the plans and elevation on March 19th." (

FAU recently put out a call for architects/engineering and construction manager proposals for a new College of Medicine (COM) Office Building… and they're looking to construct it in a pretty strange place.

As the building program explains, the COM is looking to build a two story, 16k square foot facility that would offer 6 offices, one procedure room, one sample processing lab, one exam room and a conference room for 6-8 people. The total project cost is ~$3.6M with a construction schedule from Jun 2014 to February 2015.

It's a much-needed addition as the current facility, the Charles E. Schmidt Biomedical Sciences Building, is a little cramped accommodating two classes (first year and second year medical students) and FAU has discussed expanding the class size in the future.

To further illustrate why this building is needed, it would help to explain a little bit about how medical school works.

Medical school is four years long with the first two years being didactic (lectures/small groups) and the last two years being clinical (in hospitals and other treatment centers). Besides having course loads as high as 27 credits per semester of gross anatomy, physiology, biochemistry, etc, med students also have to learn "doctor stuff" like taking vital signs, eliciting a thorough patient history and conducting both general and focused patient exams before they are thrown into an actual hospital environment. To that end, medical schools hire "standardized patients" meaning actors who relate a fictitious patient history and act as practice dummies for physical exams. Hence the need for exam rooms.

Beyond that, students need a practice space where they can learn to intubate (to make sure the oxygen tube goes into the lungs and not the stomach), suture (put in stitches… there are several ways to do it), administer IVs/take blood/prick fingers for glucose checks, and more… hence the need for procedure facilities.

According to the last Boca Raton campus Master Plan (from 2009; we should see a new one within the next year), FAU had planned to build "Schmidt Biomedical Center Phase 2 and 3" just east of the current medical school building sandwiched between the COM building and the new Engineering East building. That makes sense in creating a planned "science breezeway" which would have included Engineering East, the COM buildings, Science and Engineering and Physical Sciences… that whole row.

But now look where they want to put the next COM building: 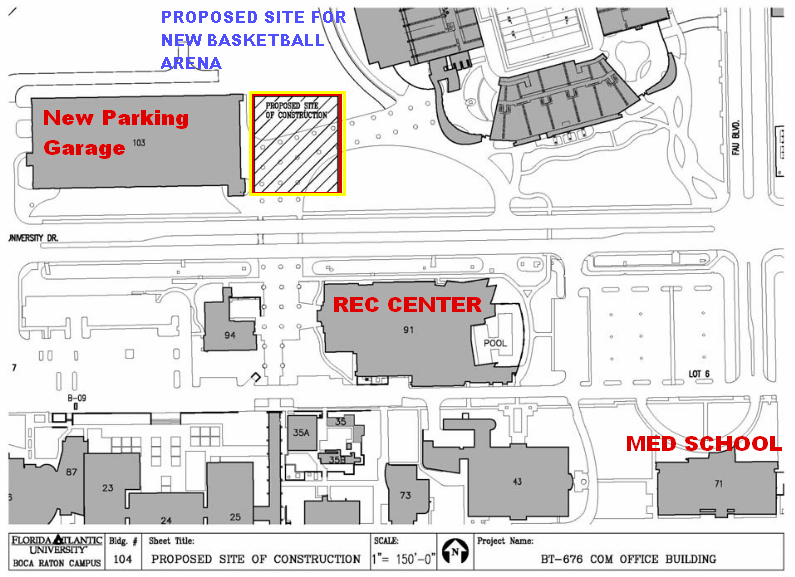 …which certainly puts a dent in the original plan (image from FAU):

So what's the deal?

Well it's pretty straightforward, really: parking. Although the lots north of the COM and Engineering East have recently been reconfigured to offer more spaces to accommodate gameday traffic, building an office building east of the existing COM building would take up some faculty spaces.

Are we seriously doing this to save some faculty spaces?

So instead if they construct the COM office building adjacent to the new Parking Garage 3, everybody using that office building can just park in the garage next door and walk over.

That's all well and good for them but it casts some doubt about the future of the Innovation Village space.

As you can see in the image above, the original plan was to have the Breezeway informally extend (via pedestrian plaza) past the Alumni/Rec Center and into the "heart" of the larger Innovation Village plaza area. As you may remember, the original plan was to have the bottom floor of PG3 be retail (a plan supposedly delayed because of cost) and the hub (with fountain and clocktower) would direct people either to the football stadium or the (eventual) new basketball arena to be built back there.  It was going to be a really awesome place when it was finally all built out.

Is that no longer the plan?

Placing an office building in the proposed site above blocks the pedestrian path across to Innovation Village plaza from the Alumni/Rec Center - which is awkward. It prevents you from creating ground floor retail in PG3 that would face the stadium, something that would likely be of prime interest to vendors. Most importantly, it also creates a situation where a beautiful new basketball arena is "hidden" behind the COM Office building. Not really seeing what sense that makes unless you no longer plan to build a basketball arena back there.

Now in theory a new basketball arena could be built east of the existing Burrow in that parking lot. That may actually be better in the sense that it could absorb the existing Burrow as a practice facility and still be facing a major thoroughfare, West University Blvd. Basketball fans could park in Parking Garage 1 or Parking Garage 3 and walk over. Constructing another parking garage west of The Burrow (as the Master Plan has suggested) would help to make up the lost spaces.

But again, that would mean the basketball arena would not be part of Innovation Village as originally envisioned. So maybe we're looking at a change in plans. AD Pat Chun has not released his Athletics Facilities Master Plan and perhaps he has other ideas for how the ultimate build-out should look… after all, he wasn't around when we originally started planning the Innovation Village so he may not agree with our plan for that space.

If that is the case, hopefully he has something better in mind. FAU deserves it.

DISCLAIMER: This blog features development news and ideas for FAU and Boca Raton including campus updates and photos! NOTE: I am not a paid journalist and I do not work for FAU. The opinions expressed herein are not the opinions of Florida Atlantic University or their affiliates. They are merely public commentary on known facts. All attempts will be made to give credit to original copyright holders where applicable.