The Case for a Student Innovation Gallery 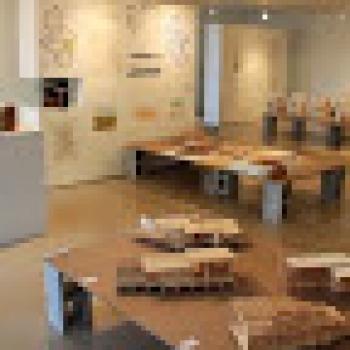 An interest in urban and campus development tends to go hand-in-hand with an interest in architecture.  There's just something very exciting about the prospect of creating a "world" in which people will work and play, to see buildings as more than rectangular blocks with doors and windows and to start thinking of them as pieces of art where form dictates experience. In fact, had a couple things been different I might have even majored in Architecture at FAU (and probably been unemployed right now, unfortunately)

But the interest still lingers, so a couple of years ago when I saw a flyer in the Breezeway promoting the "Exhibit of Lower Division ? First Year Student Work" at the downtown Fort Lauderdale campus, I jumped at the chance to check it out:

Photo credit: FAU Architecture.
The student work on display was really, really impressive, making it easy to understand why FAU's school of architecture has such a good reputation in the community. As I pored over the various models, I started to wish that this was a permanent exhibit in Boca Raton so everybody could see how good it was. I thought about all the great student work we produce at FAU in the various disciplines and how nobody gets to see it except a handful of professors and fellow students. It's a damn shame.

So I came back to Boca and asked then-director of the Student Union, Brian Keintz (now an Education Professor at Keiser University), if he'd consider some space near the front for student work. Although he seemed to like the idea, he needed to generate revenue by renting that space to various entities; in particular, he wanted to get a GameStop-type store to rent and sell games up there, along with a computer repair shop. As you know, those spaces were eventually filled by the Owl Wear Shoppe (which replaced the Commuter TV lounge), New Era barber shop (which replaced the video game area) and the TechU computer repair store (which replaced the travel agency).

Still, I think it's an important idea because it shows off the university to visitors and it inspires students to create great works themselves. The pitch goes like this: the FAU SIG (Student Innovation Gallery) would be a dedicated space that highlighted a number of student projects from the various colleges across the university system, particularly in the arts (an oft-neglected aspect of FAU because, well, it doesn't generate as much research money as the science departments).

- one room would have the architectural models (and drawings) on display, as shown above.

- one room would have various paintings and installations. Usually these works go on display very briefly as part of FAU's BFA (Bachelor of Fine Arts) Shows, which I understand are events held once a semester to show off the "final project" for the class (you can see a few pictures here). I wandered into one of these vastly underrated shows one night after seeing a bunch of people dressed up and giving away food by the Ritter Gallery and really enjoyed myself. I guess this year the Graphic Design BFA show was actually held in Delray at the Arts Garage.

- Space could be considered in the same room above for video of FAU theater performances and/or student films. Usually how this works is that there's a small room within the room that shows video on a projector, so you pass behind the curtain to sit down and watch the video.


- one room would have student photographs. You might have seen that every once in awhile student work will go on display in the hallways by Barry Kaye auditorium as part of a contest.

- one room would have various literary works (e.g. poems), maybe blown up on posters or canvas for people to read. The university apparently does produce an annual literary magazine called Coastlines but I've never seen a real one anywhere. Maybe I just wasn't looking hard enough. It's possible.

- A space (don't think it needs a full room) could have listening kiosks for records either created by FAU singers or produced by FAU commercial music teams for Hoot/Wisdom Recordings.

- The remainder of the space could go to any number of things, from robotics projects to student club work to small inventions to computer animation renderings. Basically anything that FAU students create that would be of interest to other people.

- Depending on where it was, consideration could also be made for a large-scale sculpture garden of student work out behind the building. I've seen the mention of a "sculpture trail" appear and disappear on the FAU Facilties minor project lists, so it's definitely something they're thinking about it anyway. I'm not sure where they're thinking about doing it (maybe around the lake south of the nursing building? Total guess) but there are two good locations for a project like the SIG if you wanted to do it as an independent building:


The bottom one would actually make the best sculpture garden space on campus. FAU could use more "get away from it all" green space anyway.
That said, this project (if it ever came to pass) probably wouldn't need its own building - it could very easily be part of the new Student Union, for instance. It's something worth talking about, even though FAU would want to calculate how much a "gallery" is worth when they have various needs for a new Student Union and gallery space like this might take away from revenue-deriving space like Keintz mentioned in the old/present Union.

The nice thing about this project is that it wouldn't really dictate a certain size - it could be big or small, depending on how big you want the exhibits to be. You could very easily start out small and see what the reaction is, then work your way up to something larger if it's a success. There really isn't a model like this anywhere else, which means it's a real opportunity for FAU to break the mold and take pride in its student body in a way that nobody else is doing.