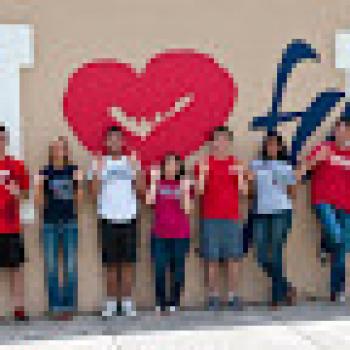 It wasn't too long ago that FAU lacked school pride.

Everybody knew it - our mascot looked like an angry chicken, nobody knew the school colors and FAU gear was pretty slim pickings at the school bookstore. We just didn't have a "brand" to sell.

You simply can't make that argument today. FAU now has a brand, an identity, a culture, and people know it. Small initiatives have added up to big changes over time. Consider the "I love FAU" wall by IRT, a popular photo op with prospective (and future) students when they visit.

Photo courtesy of FAU FB page.
In fact, if you were admitted to FAU today you'd receive a packet with your coveted acceptance letter, an Owl head sticker and a brochure for Campus Open House days with a group of students in front of this very same I LOVE FAU sign.

It's a perfect way to make a first impression. It's saying, "Welcome to FAU! We love it here and so will you. You're an Owl now!"

And that means something to people.

Student Government recently welcomed students with this banner in the Breezeway, reinforcing the "Owl Country" concept:
Picture courtesy of the FAU SGA FB page
Other members of the student body are getting into it too. I personally love the brazenness of this student contribution, a contribution which actually might have made its very first appearance at the President Obama speech on campus (interesting timing):

Picture courtesy of HootHootMF FB page, where you can order one for $12.

That's not all, of course: the campus streets have "GO OWLS" banners, the dorms have Owl Head logo doormats, the bus stops on campus have Owl head stencils, the school colors are being integrated into architecture around campus (did you notice the red and blue walls in General Classroom South?) and the basketball arena has a sign saying "Welcome to the Burrow."

It also doesn't hurt that Washington Redskins runningback sensation Alfred Morris is throwing up the school hand sign on TV after he scores a touchdown or that Comedy Central sketch actors Key & Peele recently mentioned FAU in one of their skits.

This school, after many long years of floundering around, has finally become something special.

And it's strange how much that matters. I talked to a friend of mine who had interviewed at Ohio State's pharmacy school and she said, "You know, the thing about that place is everywhere you look, you see Buckeye stuff. It's red or silver, they work the O or GO BUCKS into everything, so you pretty much have to embrace it."

When we integrate school pride into more and more things on campus, we increase the "sense of place" that so many high school students seek.We all want to be part of something bigger than ourselves and FAU gives us that now.

FAU pride has officially taken off on campus... next stop: Boca Raton. More on that Monday.