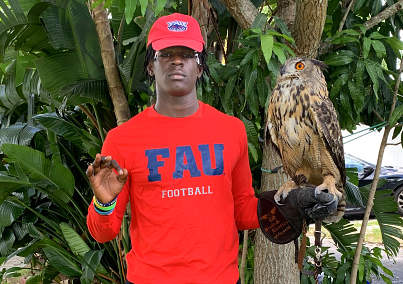 In what has been the busiest June recruiting week in FAU football history, the Owls added their fifth commitment on Friday, when wide receiver Jahmal Edrine announced his decision to join what has been termed by some as The Willie Wagon.

Just 24 hours before Edrine had announced that his final consideration had come down to three schools: Vanderbilt, Wake Forest, and FAU.

He also had NC State, Western Kentucky, Charlotte, and FIU courting his services.

But when it all was said and done, Edrine was all-in on FAU.

"Coach Guidry offered me in early February, and a couple of months after that, I started talking to coach Drew and Coach Woodie almost every day. We would talk about everything from wide receiver releases to everyday things going on in my life,'' said Edrine.

The Fort Lauderdale high school prospect was also impressed by what head coach Willie Taggart was telling him about the future of the program.

"Coach Willie is going to take FAU somewhere special - everyone is going see - and I want to be part of it,'' Edrine exclaimed.

After putting up an impressive 45 catches, 619 yards, and two touchdowns in 2019, the 6-3 190 lbs long-striding wideout received invitations to participate in both the Rivals 5 Star Camp Series and Under Armour All American Camp Series.

Edrine also posted what might be one of the most memorable commitment photos (above) in FAU history.

All decked out in FAU gear and throwing up the Owl fingers, Edrine was also holding a large live Owl on his left arm.

"My aunt knows a guy who takes care of them. I had to hurry to take the photos because it was literally minutes before I announced,'' Edrine explained.